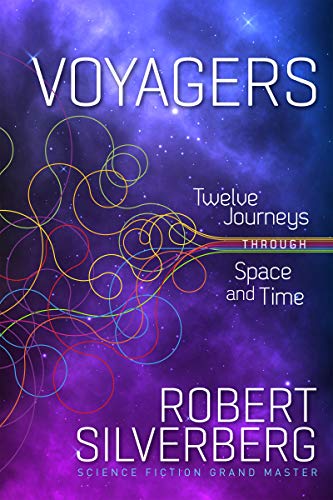 “Silverberg’s stories transform alien planets and parallel universes into concrete realities that readers can inhabit and enjoy. . . . Voyagers is an excellent sampling of his work.”

Robert Silverberg is a science fiction survivor. Of all the legendary sci-fi writers whose stories filled the pages of pulp magazines during the 1950s, only the 86-year-old Silverberg remains to tell the tale. His latest book, Voyagers: Twelve Journeys through Space and Time, is a marvelous collection of classic short stories and novellas written at various points in his epic career.

The collection begins with “In Another Country,” one of Silverberg’s many tales of time travel. The protagonists are a group of somewhat effete tourists from the future who are making obligatory stops at some of the pivotal moments in human history: the height of the Roman Empire, the coronation of Charlemagne, the medieval pilgrimages to Canterbury. The tour’s highlight is a visit to the contemporary cataclysm that will devastate our modern-day civilization, a meteor strike that will destroy one of America’s great cities and touch off a plague that will decimate humanity.

The time travelers are eager to witness the impending catastrophe, and for the most part they show little sympathy for the doomed citizens of the past. Only one of the tourists tries to intervene, attempting to save the life of a woman he’s fallen in love with, but the time-travel authorities halt the intervention and punish the do-gooder for daring to change history. Most of the visitors from the future see themselves as far superior to their unlucky ancestors, and this sense of superiority feels vaguely familiar. It’s similar to the attitude of many American tourists when they vacation in Africa or Latin America; the visitors may gawk at the impoverished South Africans or Peruvians, but it almost seems to be against the rules to actually help the less fortunate foreigners they encounter.

Several of the stories in Voyagers focus on interstellar journeys. They feature astronauts exploring or colonizing new worlds, driven by an inexplicable quest for knowledge or a religious compulsion to populate the universe. The best of these stories is “The Trouble with Sempoanga,” which is one of the most mordantly funny pieces of science fiction ever written. Space tourist Helmut Schweid decides to spend his holidays on Sempoanga, a tropical jewel of a planet, but there’s a snake in this extraterrestrial Eden, a sexually transmitted parasite called the zanjak. Helmut gets plenty of warnings about avoiding this nasty bug, but he’s careless one night with an infected tourist named Marbella.

What makes this parasite particularly creepy is that it hijacks the human reproductive system, forcing it to produce baby zanjaks instead of normal fetuses. To prevent the disease from spreading across the galaxy, the Sempoangan officials permanently quarantine all infected people on the planet, so Helmut and Marbella must spend the rest of their lives in a tainted paradise:

“They shared a small cabin and spent their days swimming and fishing and their nights making love. Over the next ten weeks Marbella’s breasts grew heavy and her belly began to swell; but when her time came she would not go to the Quarantine Center hospital. Instead she bore her Sempoangan young behind the cabin, a litter of sleek little creatures like tiny green otters, ten or fifteen of them that came sliding out of her without effort. Helmut dug a pit and shoveled them all in, and after she had rested for an hour or so they went down to the beach to watch the translucent waves lapping against the azure sand.”

As the paragraph above shows, Silverberg is a wonderfully understated writer who can describe even the most insanely horrific situations in plain, dispassionate language. Silverberg’s stories transform alien planets and parallel universes into concrete realities that readers can inhabit and enjoy. And Voyagers is an excellent sampling of his work.

Mark Alpert is a contributing editor at Scientific American and an internationally bestselling novelist. His most recent book is Saint Joan of New York (Springer, 2019).