Voyagers: The Settlement of the Pacific 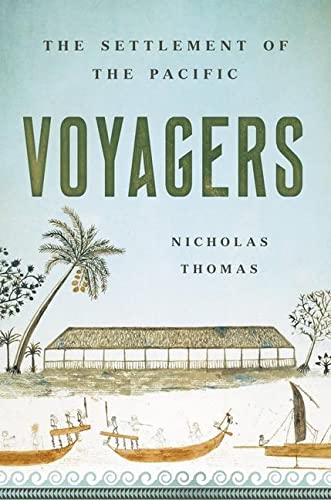 “Nicholas Thomas scoffs at the belief of some scholars that the discovery of, and landings on, islands that were tiny dots in a vast ocean were nothing more than serendipitous accidents that befell fishermen or local voyagers who got lost. Rather, he contends that the discoveries were the result of deliberate exploration.”

There are scores of islands scattered across the South Pacific, sometimes referred to as Oceania. When those islands were first “discovered”—with the word “discovered” being translated by an Anglo-centric world to mean when Europeans first stepped ashore—the discoverers were often shocked to find many of them already populated, and likely had been for centuries.

That begs three questions and compels at least one conclusion. The questions are: (1) Where did those people come from? (2) How did they get there? and (3) Why did they go there? The conclusion is that we need a different definition of “discovered.”

It’s impossible to go back in time and definitively trace the routes taken by those island peoples to “get there” or to put ourselves inside their heads so as to know with certainty their motivations. Some might say we can do no more than guess, but for those who make careers out of studying early cultures, there are clues that lend themselves to at least educated guesses.

In Voyagers: The Settlement of the Pacific, a fascinating study of when, how, and why the South Pacific first became populated, author Thomas notes that “[o]n a globe, the Pacific may look like a watery void” but his book “explores how it became the opposite of that: an inhabited realm.” He provides answers that make as much, or more, sense as any other possible explanation.

With a legacy that includes explorers like Balboa, Magellan, and Cook, Europeans began charting the Pacific in the 1500s. As Thomas says, they had known of the Pacific for over 250 years “but knew nothing about it” until then. And as long ago as the 1500s might sound, those European explorers were Johnny-come-latelys compared to the peoples who had already been navigating those waters, and occupying the islands, for centuries.

The author delves into theories on the origins of those first voyagers and what they were seeking when they first set sail. Because he is both an anthropologist and a student of Pacific archeology, there is enough science in the book to satisfy the more academically inclined. But Voyagers is written in an understandable style that makes it accessible to a broader audience.

Recognizing that hard data is unavailable, even though archeological evidence exists, the author notes that “[e]ven the most basic aspects of when and where are subject to dispute and revision. The who question is also complex.” But even more so, the author attempts to address the question of “Why did people seek to, or need to, colonize new lands?”

He considers, and quickly discounts, possible motivations as population pressure and “a spirit of adventure.” The former, he says, makes little sense in a time of low population densities, and “wanderlust” absurdly suggests that the voyagers “needed to get away from the ancient equivalent of office drudgery.”

In getting at the “why,” the author notes that scientists are handicapped in making an evaluation of the psychology of these ancient peoples. “The question of what motivated voyages that were exceptionally arduous and risky is very hard to answer without retrospectively attributing our contemporary sense of human interest and identity to people in the past.” So, for example, do we suppose they made their voyages for the same reason modern man went to the moon? Who’s to say?

Nicholas Thomas scoffs at the belief of some scholars that the discovery of, and landings on, islands that were tiny dots in a vast ocean were nothing more than serendipitous accidents that befell fishermen or local voyagers who got lost. Rather, he contends that the discoveries were the result of deliberate exploration.

Otherwise, he says, there would have been no reason for those mere fishing excursions or “local voyages” to include stocking boats with “the means of propagating this variety of species with them, but people intending to settle a new land had every reason to do so.”

Although the answers to the questions of who, how, and why are not etched in stone, Voyagers provides plenty of food for thought. It’s not a book for everyone, but if you love the Pacific islands and have a curious mind, it’s tailor-made for you.