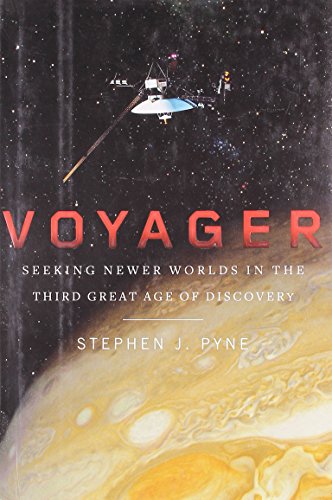 This is a book that aims to set the West’s exploration of the solar system in its historical context. Pyne, a historian at Arizona State University, has an “organizing conceit” for looking at this context based around three broad ages of discovery.

The first began with the great voyages of discovery by Renaissance explorers of the 15th century and was led off by Portugal. The second began in the Enlightenment, when mid-18th century Britain and France led the way with scientific expeditions to measure the transit of Venus and measure an arc of the meridian. The third Great Age kicked off in the mid-20th century, tackling the exploration of the last great wildernesses of Earth—the Antarctic and the oceans—and space. Driven at first by the cold war, the great voyages that mark this new age of discovery are marked by technological sophistication to the point where the explorers themselves are often robots.

Whether we accept Pyne’s categories or not does not matter much. The framework provides the author with a means to explore many parallels and similarities he finds between the Renaissance, Enlightenment, and Modern worlds and the West’s attitudes toward the three great motives for pursuing these difficult, dangerous, and expensive voyages: discovery for its own sake, the ability to do science that you can’t do at home, and finding new worlds for people to colonize or exploit.

What results is a broad and sweeping investigation of the very nature of exploration, with the larger-than-life adventure of the two Voyager spacecraft’s “grand tours” of the Solar System to give it all shape and direction.

After the introductory chapters, which do an excellent job of setting the ground for the three Great Ages and the Voyagers’ role in the present Great Age, Pyne follows the journey of the two robot explorers from their launches in 1977 to the present day and beyond. The only way it was possible to slingshot these spacecraft to the outer reaches of the solar system, through the heliopause and out into interstellar space, was to take advantage of a once in 176-year alignment of the outer planets.

That the science and technology, as well as the political and social climates were just right at just this moment made this amazing, 33-year (and counting) voyage perhaps the defining journey of exploration of our age. Long years of cruising between planets, punctuated by brief and frantic encounters as each ship swings around a planet and moves on, gives the book its structure and its style, activity and reflection, leading us step by step into the future. As Pyne puts it, the book is “an interpretive history whose internal rhythms mimic those that led to Voyager’s launch and journey.”

We meet a number of characters along the way, not just the key figures in the Voyager mission, including a succession of project leaders and technical specialists, and key figures like Michael Minovitch, Gary Landro, and Carl Sagan, but also the explorers of previous Great Ages: Magellan, da Gama, Columbus, Cooke, Lewis and Clarke, Shackleton, and many others.

But the people are essentially incidental to the story. This is a history book and rarely dwells on individual stories. Institutions and nations also appear. Portugal’s struggle with Morocco, the USA’s struggle with the Soviet Union, JPL’s struggle with NASA, the Royal Society’s competition with the Paris Academy of Science—all provide the impetus to the great waves of exploration, discovery and, sometimes, colonization.

It is a book that leaves no stone unturned as Pyne’s focus moves from one aspect of exploration to another—the naming of newly-discovered places, the treatment of space exploration (and especially the fantasy of colonization) in science fiction, the legal treatment of new worlds, the people who speak out for and against exploration.

Sometimes the comparisons between the Voyager mission and earlier explorations are interesting and instructive. Pyne’s discussions of the political and social, even the psychological bases for exploration are often fascinating. Sometimes they verge on the bizarre, as when he compares the physical dimensions of the Voyager craft with those of Lewis and Clarke’s nineteenth century keelboat, and Columbus’s caravel Niña.

While the writing is generally precise and very nicely done, Pyne has a small tendency to sound overblown and somewhat poetical (e.g., “[Voyager’s] trajectory has the arc of a hero’s quest.”) In his defense, he has taken on a huge and quite magnificent subject, and a little exuberance in the writing should probably be forgiven. Even when he swings the other way, rattling off transmission bit-rates, speeds, distances, and broadcast signal strengths, he uses technical terms with complete confidence and clearly understands the engineering, the communications jargon, and the celestial mechanics he is talking about.

Yet there is only so much that can be done with words. As Pyne himself says, “The Voyagers spoke to the public primarily through images, for which words served more as captions than as stand-alone texts.” So it is extremely odd that the book contains not one single image from among all the thousands that the Voyagers sent back to Earth. All we get are a few (simply drawn) diagrams and graphs in an appendix. It is true that many of the Voyager images Pyne talks about are so well known that anyone who has been watching the news for the past 30 years will recognize many of them. Yet the lack of images is a striking and unfortunate omission.

Voyager is a thoughtful and reflective book in which Pyne brings a wide and frequently detailed knowledge to bear on one of our more interesting human traits: the urge to explore. It is not the book to look in for the human faces of the people who discovered and dissected new worlds. It is a book that considers the broader sweep of history in counterpoint to the detailed technical, scientific, social, and political minutiae of this one, exceptional voyage.