Voodoo Vengeance and Other Stories (The EC Comics Library) 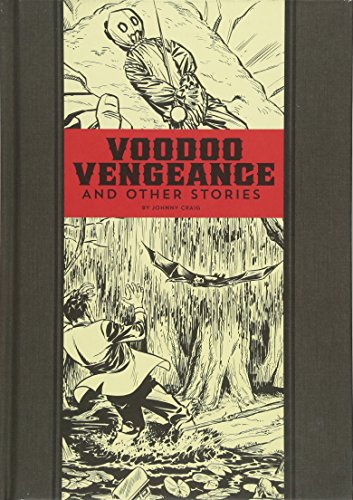 Once upon a time it wasn't superhero comic books that ruled the newsstands. Yes, there were plenty of titles with spandex wearing, primary colored men and women doing their duty to fight back evil and let good prevail, but their numbers paled in comparison to what else was available.

Crime! Horror! Revenge! Murder! Sex!—these were what sold hundreds and hundreds of thousands of comic books. And not just to kids, but to adults that loved to read the lurid tales told in panels of black and white illustrations.

Many companies capitalized on this boom, but one stood out from the rest: EC Comics. EC's Vault of Horror line was the top of the pulpy top. They cranked out nightmarish tale after nightmarish tale each and every week, filling the insatiable market that wanted to read about vengeance, murder, good girls gone bad, and bad boys getting their dues.

Among the greats of storytelling and illustration for EC was Johnny Craig. Voodoo Vengeance and Other Stories collects 25 Craig favorites together in one volume. Tales with such subtle titles as "Horror House!", "Vampire!", "Nightmare!", and "Impending Doom!" Yes, the exclamation points were part of the original titles.

Stories about pure terror, mutiny, double crosses, bloody crimes, and the supernatural were Johnny Craig's stock in trade. He brought a strong style, with crisp black lines, and a keen eye for solid storytelling to a market that was flooded with writer hacks and obvious ripoffs.

Craig was known in the business for being a relaxed creator, a man dedicated to detailed craftsmanship, and a storyteller who could twist a tale into something that was far from expected. By today's standards—standards that were taken from men like Craig—the stories would seem somewhat clichéd. But back then in the forties and fifties, they were fresh and different. The obvious ending was not the ending that Craig gave his readers. Which made fans of EC comics clamber for more and more.

Then what was called the Comics Code Authority was created and subjects like vampires, monsters, and murderers suddenly became taboo. Craig's, and EC's, heyday was done. Comics became safe and boring, meant for the kiddies, not for adults looking for the torrid and gritty tales of a time gone by.

Voodoo Vengeance and Other Stories is a collection that doesn't just present reprints of old classics, but provides several essays on the genre and on Craig and his influence on storytellers that would come after him. Bradbury, King, Straub, Koontz—so many writers would look to Craig's work as inspiration for their novels and short stories. For this influence alone, Craig should be hailed, but even if Voodoo Vengeance and Other Stories is all that he is remembered for then the man's memory is being honored the right way.