The Volunteer: One Man, an Underground Army, and the Secret Mission to Destroy Auschwitz 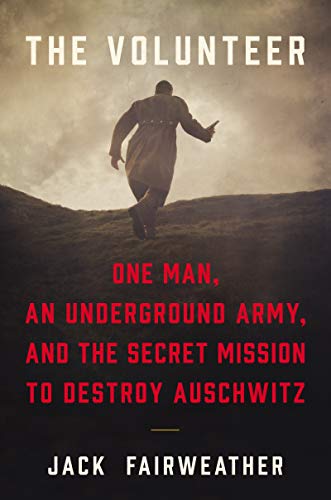 “The background well-blended into one man's heroic story forms an epic tragedy of Poland in World War II . . .”

To the growing number of new nonfiction accounts of individual heroism in World War II comes Jack Fairweather's The Volunteer. The author, an international journalist, gathered what remains of how Witold Pilecki, an "average man," could "expand his moral capacity to piece together, name, and act on the Nazis' greatest crimes when others looked away."

The subject, "farmer and father of two in his late thirties with no great record of service or piety" proved remarkably hard to research. Material proved fragmentary and scattered across several nations, with most of the "primary sources this book is based on are in Polish and German." Different scholars found compiling, decoding, finding, and translating Pilecki's records a decades long process.

Fairweather "included camp details that it's clear his subject would have witnessed but does not mention in his reports." Pilecki wrote an "exacting chronological account" of the infamously deadly Nazi Auschwitz concentration camp "in raw and urgent prose" but still provided "only a fragmentary and sometimes distorted picture."

This great adventure begins when Witold Pilecki as a military officer found himself caught up with the simultaneous invasion of Poland by Germany and Russia in 1939, a campaign of mass enslavement and extermination of the Polish people. "The question facing every Pole was whether to accept the fact [of Poland losing its independence] or to fight on knowing that to do so was futile."

Pilecki helped to form the Secret Polish Army to free his conquered nation. He volunteered, "to infiltrate the [Auschwitz] camp, gain intelligence, and, if possible, raise a resistance cell and stage a breakout." Auschwitz "was the first German camp on foreign soil and the first to target a group according their nationality, in this case the Poles."

Workers could survive and complete their sentences but execution became common and few inmates overcame disease and starvation for as long as three months. One quarter of the camp population went to the hospital for disease or injury at any given time.

The Nazis built Auschwitz on race. Catholic Poles "were curfewed, rationed, and rounded up for labor camps . . . or summary execution" but the Nazis "stopped short of systematic execution" because of "seeing some racial value in the population."

"The policy towards Jews was murderous." Pilecki became first, or became one of the first, to report "on the gassing of Soviet POWs" and the systematic murder of Jews at Auschwitz.

Pilecki succeeded although the camp's intense security thwarted his efforts at a general uprising. The camp had networks of profiteers and survivalists but also workers who used the system to help other prisoners. Its underground smuggled medicine into the camp hospital and even plotted to infect certain officials with typhus.

Pilecki chiefly organized traditional networked cells in the camp and passed detailed information on to the often-divisive Polish underground and to British intelligence. His pleas for bombing or liberating Auschwitz went ignored. Pilecki fought bravely against the Germans in the Warsaw Uprising but the post-war Communist polish government tried him for treason and had him executed.

Well-illustrated, with a glossary of characters, and extensive documentation, The Volunteer serves as a broader history than one man’s. The background well-blended into one man's heroic story forms an epic tragedy of Poland in World War II, so much so that often Pilecki becomes lost in the story.

The author writes in a prose that gives him more familiarity with the subject than the documents likely support. Fairweather used Pilecki's first name throughout. The reader could mistakenly think that "Witold" and "Pilecki" are different people.