Voice's Daughter of a Heart Yet to Be Born 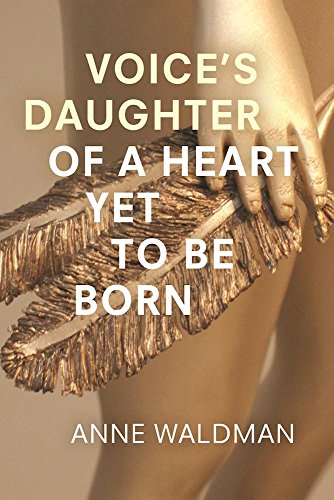 “Waldman has always been a writer of the ‘outriders,’ the visionary rebels who make art new and engaged.”

Anne Waldman has been writing now for five decades as literary spokesperson and engaged poet, ranging from her classic Beat collection Fast Speaking Woman to her celebrated The Lovis Trilogy: Colors in the Mechanism of Concealment, which won the Shelly Memorial Award and the PEN USA Poetry Center Award.

This remarkable Voice’s Daughter of a Heart Yet to be Born summons the voice of the unborn. Using William Blake’s The Book of Thel as its suggestive model and poem and prose poem as its form she creates an awakening meditation on our times and all times.

Full of conscious and subconscious energy it bravely brings forth the diverse forces of our lives. It is a work of epic vision delivered as if in a trance of truth saying. Waldman describes herself as a writer, “I feel myself in the lineage of epic poets everywhere, with special emphasis on the melopoeia of the work, the music of the language, the music of the spheres.”

The book itself is not easily classified, its essence elusive, and yet critics attempt to characterize it as: “a vast and magnificent epic” (Lyn Hejinian), “dark meditation on endings, on revolution, on embodiment. . . . poem is a place of grief and resistance, of improper questioning, and of explosive, irrefutable imperatives”(Elizabeth Willis), “a grand listening, a discourse inside ecstatic presences”(Dawn Lundy Martin). It pulls you into some new understanding of writing and art, one that requires the reader or viewer to come to terms.

A comparison that many might miss is with Kenneth Patchen’s The Journal of Albion Moonlight the provocative and edgy anti-novel written to prevent the U.S. from going into war. It is a panoramic vision of the apocalyptic nightmare vision to wake us to our humanity.  This is what Waldman intends though she presents a vision with more light and beauty. Patchen’s narrator declares directly to the reader: “You have read many books. This book is reading you.”

Early on the mythic figure of Thel is put before the reader:

“When Thel lifts her head, flowers feel it in their cellular dance. She is like water for them, she is a kind of thirst unsatisfied. Her Offworld is womblike, and safe to venture out when the metabolism is not cloaked or clocked. The unborn reaches into her vocabulary to “starry” a sentence that would relieve the others of their woes and cares but because she is not established, no home! No shelter! She does not know her way about, mistakes her standing, her possibility for survival, the postures that she would take with Other, with outside. . . .”

Confusion and doubt are mixed here for Thel and the reader. The poet is just the Sayer. Interpretation is left for us all.

Thel’s character or force, if not essence, is presented variously throughout the text, as in:

Like Thel, the book is a dynamic force refusing to be defined or boxed, and so the reading becomes an act of self understanding and creation. Willis’ words echo truly, “This poem is a place of grief and resistance, of improper questioning, of explosive, irrefutable imperatives.” It is a real challenge to the reader and to our times, but the rewards are transformative because they are well earned.

If we use William Faulkner’s criterion for greatness we must judge by “the magnificence of the failure,” and here the vision and art are powerfully combined. Waldman has always been a writer of the “outriders,” the visionary rebels who make art new and engaged. She delivers that here.