The Voice Over: Poems and Essays (Russian Library) 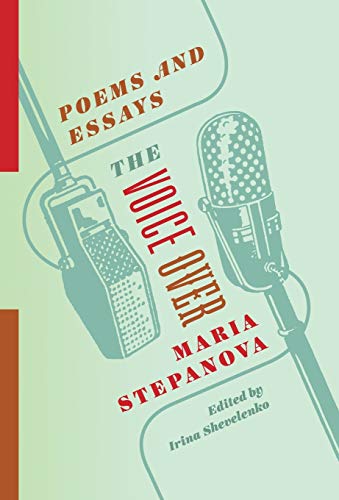 The history of Russia in the 21st century has been almost as tumultuous as its 20th century history. Maria Stepanova writes poems and essays embedded in history, describing the quest of an individual seeking a future in a society wedded to the past. This volume is part of the Russian Library series of works in translation launched by Columbia University Press in 2016.

Stepanova’s poetry ranges widely in form, sensibility, and structure. This volume includes selections from the many books of poetry she published from 1996–2016, the tumultuous period after the collapse of the Soviet Union. Stepanova links her personal and family history to the history of her nation. In one poem, she presents the lyric “I” as a version of her country itself.

That “I” is a recurring subject of her essays and poems. In the poem “Spolia,” she echoes the criticism of her poetry as having an insufficiently individuated voice: “she simply isn’t able to speak for herself.” She struggles to define that voice against the weight of national and family history as well as current events. The criticism is refuted by her innovation in both essays and poems, as she practices and defines a new kind of poetry.

One helpful influence is the father she recalls in “Spolia.” The more she remembers him, the more her identity takes shape as a hopeful individual in a society where pessimism has become a habit.

Though her experience of growing up in Russia in the late 20th century is one of dislocation, violence, and poverty, Stepanova finds strength in her ancestry: “A Gypski, a Polsk I, a Jewski, a Russki.”

Stepanova’s experiments with syntax, structure, and rhyme are reminiscent of the work of e.e. cummings. Like cummings, she plays with language in many ways, from rhyme to the arrangement of words on a page. She shares his love of images of Nature: “So, black earth must have a dweller./So here’s black earth, but where’s she who dwelt there?/And there’s the air—it swirls as you,/And you calm the air down too./Recognize, if nothing else, the seeing/That is stitching together the book’s cover,/Leaping in lilacs like a swing/Into here-world—and there-.”

Though Stepanova’s visual experimentation with language is easily translatable, in other cases her writing poses challenges to translators. Each section of this book, based on a different book of poems or essays, has a different translator. One of them, Sasha Dugdale, provides such a broad definition of translation, as “a triangulation rather than a translation,” that it becomes hard to distinguish the translator’s work from the poet’s. Dugdale substitutes a few allusions to English poetry for some references to Russian works in Stepanova’s original. This seems an overly free license for a translator to take, and some English references the translator introduces seem jarring. The other translators claim to hew more closely to Stepanova’s original, though that is difficult to evaluate for non-Russian speakers.

Nonetheless, Stepanova’s innovations are evident in her poems and explained in her essays. As Pushkin established a new literary identity for Russia, she seeks a new role for literature. In her view, contemporary art, by separating poets from their role as “creators of the beautiful,” transforms them into “the producers of what is comfortless, inapplicable in everyday life, socially unacceptable, and continues to go through the desert towards an unknown goal.”

In the last section of the book, which consists of essays on other writers, Stepanova articulates her view of time and history.  Her praise for German writer W. C. Sebald applies to her own work as well: “. . . what he’s busy doing is called rescue of the drowning, of all things and all people excluded, crowded out and subject to crowding, of those losing their meaning, of all those displaced and forgotten persons of world history, of everything that disappears. . . .”

In addition to presenting a voice at once fresh and mature, ranging from works Stepanova wrote in her twenties to those from her forties, this book helps non-Russian readers understand more about the country, its history, and its literature. The last essays in this volume range widely in analyzing works by such Russian predecessors as Marina Tsvetaeva, Lyubov Shaporina, and Alisa Poret, as well as by Sebald and Susan Sontag. While Stepanova draws deeply on her Russian heritage, in her desire to see “beyond the boundaries” of her nation, she takes her deserved place on the international stage.