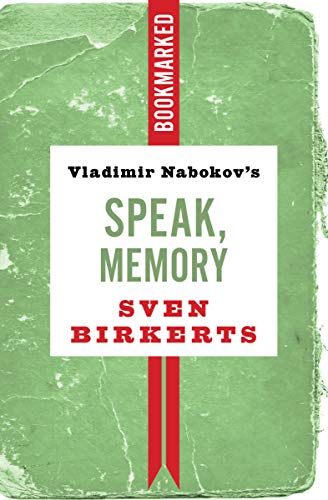 Sven Birkerts’ book-length critique of Speak, Memory is a meditation on the nature of time, the past, language, literature, and the self. While Nabokov’s book is written in a complex, lyrical style, Birkerts writes plainly and directly. Birkerts finds in Nabokov’s book illumination of his own life, indicating how a great memoir can shape not only the writer’s life but the lives of others.

Birkerts’ close reading of Nabokov teases out patterns from the dense and meditative prose of the older writer’s work. The opening section deals with the nature of time, showing how Nabokov embeds future moments in early ones. In particular, his nostalgic recollections of childhood innocence foreshadow later events which will disrupt it, such as his father’s sudden death. Brief intimations of later moments in elaborately described early experiences suggest the malleability of time as held in memory.

While many see their childhood as a halcyon time, for Nabokov the disjunction between childhood innocence and maturity was particularly great. He grew up in an extremely wealthy family in St. Petersburg and on their country estate before the Russian revolution of 1917.  Afterwards, his family lost almost all they had possessed, and his father died from a gunshot wound in 1922.

These traumatic facts are brought out indirectly. According to Birkerts, Nabokov deals with this trauma, and protects the privacy of those he loves, by focusing his attention on memories of childhood.

As Birkerts shows, this expansion of remembered moments is related to Nabokov’s focus on perception. His pursuit of lepidoptery, the study of butterflies, is an example of the way in which an extreme focus on observed detail helps to bridge the boundary between the inner and outer worlds.

Finally, Birkerts points out that to some extent the subject of this memoir, and in a sense of all literature, is language itself. As Birkerts notes of Nabokov, “In everything he writes, he seems to be saying that this kind of expression, this art, is as far as recovery and redemption can go.”

There are several intriguing analyses of repeated images in Nabokov’s memoir. In two such images, the “folded carpet” and the “watermarked foolscap” paper, Birkerts finds symbols of life itself. The first represents the design of life, the second our attempt to discern and understand it, through our actions as well as our creations, especially the form of memoir.

The weakness of this book, paradoxically, is in Birkerts’ most autobiographical passages.  Though the parallels between his parents, who emigrated from Latvia, and Nabokov’s Russian parents are intriguing, the extensive discussion of how he came to write the book with which the story begins seems belabored. The conclusion also wanders off to address his life rather than Nabokov’s.

There are themes Birkerts might have explored further, such as mortality, as addressed in this passage from Nabokov’s book: “I have to have all space and all time participate in my emotion, in my mortal love, so that the edge of its mortality is taken off, thus helping me to fight the utter degradation, ridicule, and horror of having developed an infinity of sensation and thought within a finite existence.”

Nonetheless, this clearly written book provides insights not only into Nabokov’s book but into literature and the creative impulse generally. Birkerts’ work seems to help Nabokov’s complex memoir unfold its beauty fully, like the butterflies Nabokov so obsessively and skillfully pursued. Birkerts sees obsession as “a kind of coping mechanism that proposes that the intense focus on anything can be a shield against psychological turmoil.” His obsession with Nabokov serves Nabokov, Birkerts, and the reader of this volume well.