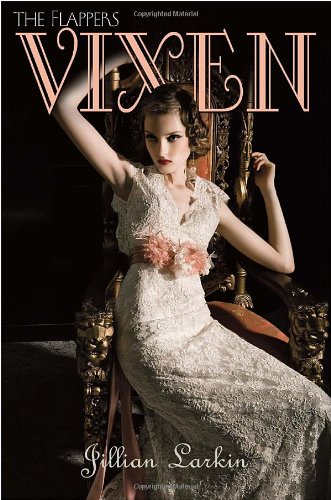 Vixen is a young adult book with a new edge. It’s set in the Roaring 20s when Prohibition was in full swing and hidden speakeasies dotted the landscape, gangsters grew in prominence and prestige, and teenagers had an exciting and pulse-pumping outlet to get into trouble.

The flapper lifestyle, the freedom and excitement of it, it is sure to draw in its share of young girls with the promise of something extraordinary. The three protagonists of this story get caught up in it with decidedly mixed results.

Gloria Carmody, 17, is engaged to be married to the handsome but boring, stuffed shirt Sebastian Grey. They are both from prominent Chicago families, and Gloria is hardly the sort of girl that would do anything to embarrass them—unless you count sneaking into illegal drinking establishments, teetering on the edge of an interracial affair, and possibly making waves with the jazz-loving set.

When Gloria’s cousin, Clara Knowles comes to town, her mission is to make herself useful. She’s supposed ensure that Gloria stays on the straight and narrow path toward wedded bliss. There’s just one problem. Clara may be a teenager herself, but she’s been living a lifestyle that would turn Chicago high-society on its ear—and she has to keep it a secret at all costs.

Lorraine Dyer, Gloria’s best friend, is the wildcard in the bunch. She’s rich, but neglected. Her most secure relationship—her enduring friendship since childhood with Gloria—is veering off track as Gloria pursues other interests. In spite of her best efforts, “Raine” just can’t get what she wants. Her envy is about to cause catastrophic results.

There’s a debate in the world of writing about the need for a prologue. Vixen has one, but it isn’t necessary. It contains an important little clue, but because it is without context, one will not recognize its importance and likely forget about it as the story moves forward.

Initially and perhaps because of the eye-catching girl on the cover, it appears that the story is about one character, Gloria Carmody, but the reader soon realizes that it is the story of the three girls noted above in equal measure. Each girl is the focus of a chapter in chronological fashion and this structure provided a satisfying and predictable way of keeping track of each character’s story arc.

The story has a mature, film noir quality to it—not a common young adult sensibility. It’s easy to forget you’re reading about teenagers. The author seems to realize this, as there are references to a character’s age or a mention of him or her as teenagers every now and again. Not a bad idea.

The story starts somewhat in medias res, and it took time to get oriented to what was happening, but once this was accomplished, things took off at breakneck speed. Vixen is an action-packed, exciting read. It is chock full of adventure, intrigue, and mystery. Larkin shows real skill in weaving the lives and conflicting goals of the characters into an engaging and page-turning story.

Vixen is the first book of a series. It concludes on a surprising, unexpected twist. It also leaves the reader anticipating the continuation of an exciting story in the next installment, Ingenue, due to release in the summer of 2011.