Vivian Maier Developed: The Untold Story of the Photographer Nanny 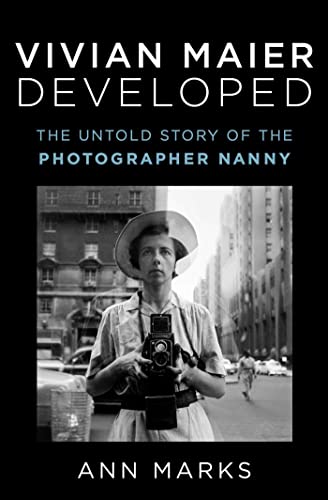 This is an unusual book because, in almost every way, it is a sequel to a documentary film. Without that film, there’d be no book.

The film Finding Vivian Maier was a great story that told the tale of how two guys who frequented storage units for valuables, somehow discovered a great artist—photographer Vivian Maier. No one had ever heard of Maier, but her long-lost photographs unleashed a great talent upon the world and the film became a sensation and was nominated for an Oscar in 2014.

The film not only presented Maier’s street photography, it also revealed an intriguing mystery about Maier’s secretive past. Her day job was that of a nanny but, as the filmmakers discovered, the families who employed her and the children she cared for, knew almost nothing about her background. She was a riddle, wrapped in a mystery, buried inside a darkroom.

Enter Ann Marks who had spent 30 years as a senior executive in the corporate world before becoming the chief marketing officer of the Wall Street Journal. Like everyone else, Marks watched the Maier documentary and became obsessed with learning Vivian Maier’s background. Unlike the rest of us, Marks gave in to her curiosity.

This book is a testament to her relentless work and her genealogical skills. It is truly impressive the way Marks traces the origins of Maier’s family in a small French town, showing how illegitimacy haunted them and essentially created the taciturn Maier who had a personality that many found severe and off-putting.

Marks recounts anecdote after anecdote like the experience of the Hardy family who lived in Peter Cooper Village in Manhattan. The kids, a boy and a girl, lived with their divorced father and, as Marks writes, they “were starved for maternal warmth.”

Considering that, they certainly hired the wrong nanny in Vivian Maier. Though she was a great artist, capable of composing a compelling photograph with a single shot, she was the anti-Mary Poppins. Decades later, the kids still remember that Maier “was cold, unapproachable, and disengaged,” Marks writes.

Maier’s stoic demeanor comes up again and again in Marks’ book. Even among her peers, Maier was cold. She’d become “friends” with someone but drop them after a month, never to be seen again. Approached decades later, those friends could only remember how odd Maier was.

Marks joins in the piling-on party, even criticizing Maier’s appearance. “She possessed linebacker arms and dark circles under her eyes,” Mark writes. “Those physical attributes, combined with her oily visage, were off-putting to those who met her. Again and again, employers and friends characterized her as unattractive, and her self-portraits confirm she became progressively so.”

But it’s clear that the author is enamored of Maier’s otherworldly talent. Although Maier studied her contemporaries, we’re given the impression that she one day picked up a camera and began shooting arresting photos almost from the get-go.

Lebowitz also said that talent is sprinkled throughout humanity with no rhyme or reason. That seems to sum up Vivian Maier. She may not have had the looks or the personality but she sure had the talent.

Marks’ research in unearthing Maier’s roots is formidable, and we’re all the richer for her obsession. But considering the fascinating story here, the writing pales in comparison. It serviceable but nothing special. Whether a reader is enamored with this book will largely depend on how much more one wants to know about Maier after seeing the ground-breaking documentary.

But—and this is a huge but—the book is printed on high-quality paper and shows off Maier’s talent. There are over 400 photographs, many never before seen by the public. That alone is worth the price of admission.

In reading about Maier, the woman behind the lens, one wonders how much it matters that she was a misanthropic character. Maybe it’s her art that should be admired, period. Maybe it’s better knowing less about an artist as a person. It seems that’s a lesson we’ve learned over and over in these last five years.