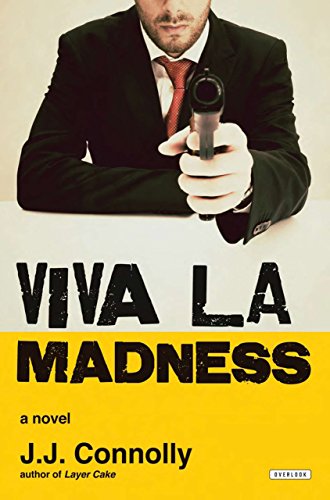 The anonymous anti-hero of J. J. Connolly’s Layer Cake is pulled out of sunny retirement into the drug game despite being persona non grata in his own country of England.

Though he has no plans to return to his bad days, his retirement ends when his pal and former business associate Mr. Mortimer—Morty to his friends—offers him an option he can’t refuse.

Shortly afterward, Morty appears with two nasty London criminals: the violent and menacing Sonny King and his paranoid partner Roy “Twitchy”Burns. Both villains have been in the Caymans laundering buckets of cash and want to bring our man back to London on a false passport.

Before long, our anti-hero is entrenched in London’s criminal world and fleeing Venezuelan drug cartel and killers in Mayfair; however his biggest problem is not drug dealers, money launderers, financial fraudulent bankers, or trained killers; it is the daughter of a South American drug lord who seduces the ex-retiree. And of course there’s still the menacing Sonny King to contend with.

“The VIP area especially is a microcosm where criminal heavyweights and bemused aristocracy come to give each other a jolly good backslapping. It’s that curiously strange but perfectly understandable mix of offduty villains and neveronduty aristocrats who get along famously.

“Who else doesn’t have to get up for work at seven on a cold and frosty morning? Who else has easycomeeasygo money burning a hole in their pockets, begging to be squandered? Who else regards morality, timekeeping and good manners as purely optional? Who else have what psychology books would call a ‘sociopathic sense of entitlement’?

“He formally introduces me to Dougie. In a less forgiving light, Doug is a disaster area—a sweaty cokehead, not pretty. You get the sense that Douglas Nightingale is from a different era—that peculiar mix of ultraperceptive, seenitall before, and at the same time naïve, childishly stupid, too trusting for this cruel life.

“‘I thought your paths might have crossed somewhere along the line,’ says Sonny.

“Dougie nods with hostile eyes. Sonny disappears. Dougie—like a halffucked dog—is transfixed by a girl dancing provocatively in front of him. Then, without a word, Dougie wanders off, leaves me standing like a plum.

“The club is full to bursting now but I don’t really feel in the party spirit, I feel jetlagged and spunout. Then I feel a big slap on the back.
I turn round to see Sonny with a huge cigar stuck between his teeth. He’s with a welldressed swell who’s grinning like he’s had a noseful.

“‘This is my man Giles,’ Sonny shouts above the music. ‘If ya ever wanna buy a Picasso, or a nightclub, then he’s yer boy. A proper lawyer,’ says Sonny with a wink to Giles.

“They both laugh. Giles has a girl on each arm, like some handsome, foppish playboy wastrel who’s escaped from a Broadway musical, but looking at me like he knows something I don’t. I lean in close on Sonny, ‘I was just cutting out, Sonny.’

“‘And?’ he shrugs, dead dry. ‘That’s up to you. Shame you two couldn’t have a little chinwag.’

“Sonny gets distracted by some passing admirers. He drags them over to the bar, snapping his fingers for champagne.

“‘Another time, another place, perhaps,’ I say turning to shake Giles’ hand. ‘It’s hello and goodbye at the same time, I’m afraid.’

“‘Can I have my hand back, mate?’ I ask.
“‘Oh, sorry!’ Giles says. The girls laugh and so does Giles, goodnaturedly.

“‘Actually, Giles, I’ve had a long day. I hope you’re not offended—or Sonny—but I’m just off.’

“‘Offend our Sonny?’ he says. ‘I didn’t believe that was possible, old buddy.’

“Again the girls laugh like it’s the funniest thing ever.

“‘Sure, sure,’ I say, suddenly desperately wanting to get gone. ‘Till next time.’

“‘You’re not wrong, pal,’ says Giles the Lawyer with a wink and a smidgen of Cockney accent.”

Author Connolly brings his own unique gangster lexicon to the table in this grippingly intense follow up to Layer Cake. Upping the stakes, he has created fascinating characters full of swaggering confidence in a menacing world of criminals, henchmen, drugs, and ill-gotten gains.

Yet for all its brutal in-your-face scenes of sex and violence, the book is not without humor—admittedly very dark humor—and some real laugh-out-loud moments of originality. Utterly enthralling.