The Virtues of Our Vices: A Modest Defense of Gossip, Rudeness, and Other Bad Habits 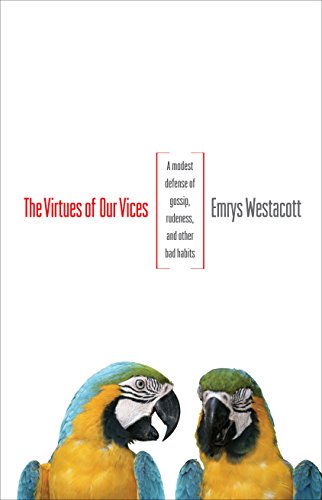 So when Emrys Westacott’s title, came across my desk, I was excited to see that someone spent time to discuss those areas of the ethics of oral communication that are usually neglected; rude behavior, gossiping, snobbery, inappropriate humor and the loss of respect for others’ opinions.

These subjects, as Mr. Westacott suggests, are rarely discussed in the academic fields of communication ethics, nor are they considered “major” issues in terms of business or political communication. In fact, all five are now considered, unfortunately, “normal” and accepted behaviors in the areas of argument and persuasion.

Though the subtitle suggests differently, Mr. Westacott does address the question as to if and when these communication behaviors are inappropriate or, as Mr. Westacott suggests, simply “bad.” There are a multitude of moral judgments we make when we tell a story about another person, ignore that person, deem our self superior, are outright rude to another’s communication, tell an off-color joke, or simply disrespect someone because of their opinion.

The Virtues of Our Vices is more than just a study of the communication ethos, the societal rights and wrongs of our interpersonal interactions. It is a discussion of the philosophy of such communication. As such, the reader would need to understand Immanuel Kant, Robert Goodman, Richard Dawkins, Friedrich Nietzsche, and Karl Marx, and how these and other philosophers and the Enlightenment affect our daily communication.

Written as five independent essays, Virtues should also be considered an excellent supplement for the academic studies of communication ethos in rhetoric, persuasion, business and political communication programs, as well as for general ethic courses.

This is a well-written book with the logic patterns expected for a philosophical study. Though the reader may disagree with the conclusions of the five Mr. Westacott essays, there will be no question that those conclusions are based on the study, evidence and presentation of the facts. Each essay is independent and can be read as a standalone study.

More important is the study of these much neglected areas of oral and non-verbal communication by mainstream academic and popular writers. We all engage in these behaviors while determining, mostly subconsciously, if what we are doing is “right” or “wrong.” The question is “Why do we do this?”

Mr. Westacott properly points out that there are a huge number of factors we weigh each time we speak of someone else’s misfortunes (or fortunes) or when we decide that a bit of humor, though questionable, is appropriate or inappropriate in a specific situation.

From a practical position, The Virtues of Our Vices is the perfect book for those who ask the question “Why would someone say or do that?” It is also a must read for those engages in corporate and political communication and Human Resource Management to understand the use of the informal communication avenues, such as the infamous “water cooler talk.” in information dissemination and the “telephone” effect as that information is passed from person to person.

Mr. Westacott also addresses the issue, though not directly, as to why negative campaign advertisements work, at least from a philosophical basis. More specifically, why the public, especially supporters of the messenger, seem to glean onto these messages as “truth,” though the information in many cases is misleading or simply inaccurate.

There is one more thing that Mr. Westacott does very well in each of the five essays. When used in a generalize context, we think of terms like “gossip” and “snobbery” as negative, something to always avoid. There are some cases, Mr. Westacott properly argues, when such forms of communication can be positive and constructive. This is an important point and one Mr. Westacott well illustrates in each essay.

The chapter this reviewer found most interesting concerned “snobbery,” and how Mr. Westacott constructs his definition of the term from “believing that you are superior to another person,” to a much more accurate, “believing you are superior to another person in certain respects because you belong to or are associated with some group that you think places you above them in a social hierarchy.” This definition alone can explain a number of arguments facing our society in the areas of religion and politics, to mention two.

You will enjoy reading Virtues whether your interest is academic or practical, business or politics, persuasion or argument, interpersonal or group communication. You will find Mr. Westacott’s writing reflecting his own ethos as well as his pathos of the subject of ethics and communication.