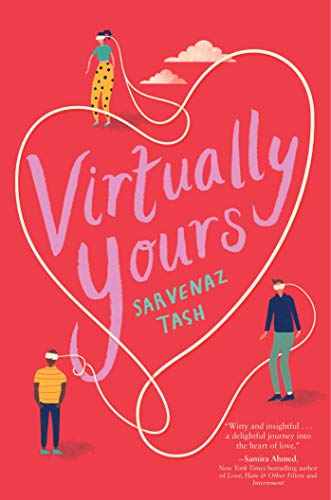 “Virtually Yours is a fun book with diverse characters, questions that plague many teens, and the separate worlds of home and college.”

Mariam Vakilian wishes she were more excited for her first year of college and all of the adventures that await her. But she’s heading into it with a broken heart. Her boyfriend of three years blindsides her with a breakup only weeks before they are to begin their long-distance relationship, and then she sees him on social media, looking carefree and happy. She heads to HEAVR, the brand-new Virtual Reality, Happily Ever After online dating program.

“His selfie made me do it. Yes, I had the 40 percent off coupon from the orientation fair. Yes, it was almost about to expire. Yes, my roommate, Hedy, had made a casual comment just the day before about how I never seemed to leave our room. And if I wanted to, I could use any of those as excuses for why I found myself sitting in the waiting room of HEAVR, about to place my love life in the hands of some virtual gods.”

And what did those gods do? Out of all the guys in the country—the world—her ex, Caleb, is one of her top three choices. What’s a girl to do? She chooses him. But she changes her identity, so he won’t know it’s her.

“If I could get Caleb to agree to a photoless date, if I could make an avatar of myself that didn’t look exactly like me, and if I could present myself under a different name . . . then maybe, maybe, I could get him to fall in love with me again.”

But things begin to get real. At some point she will have to tell him the truth—and that couldn’t possibly go well, could it? Meanwhile, she’s getting to know her roommate, becoming friends with another guy HEAVR threw up as a match, and navigating her family’s feelings about Caleb. On top of that, she still doesn’t know what she wants to do with her life. She’s getting by, taking a variety of core classes, but can’t settle on anything. Is her love for Caleb holding her back?

Virtually Yours is a fun book with diverse characters, questions that plague many teens, and the separate worlds of home and college. The book feels at times formulaic and predictable, but the unique Virtual Reality dating app adds some fresh ideas, and sometimes it’s nice to just have a read where you don’t have to worry about what’s going to happen.

Virtually Yours is recommended for teens, people interested in new technology in a basic sense, and anyone looking for a light-hearted read.