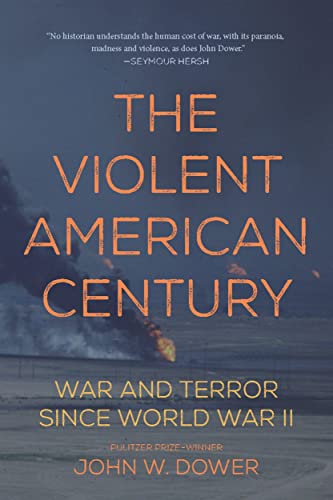 John Dower's title does not mean—quite—what you may think. It sounds like a sweeping condemnation of U.S. foreign and military policy over the last 70 years. In fact Dower is strongly critical of those policies. But his book's scope is broader than that, discussing violence in general and not just conflicts relating to U.S. actions.

His title is not a summary of the book's content but a specific historical allusion, referring to a 1941 Life essay by Henry Luce, the magazine's founder, calling for an end to American isolationism. In the essay, Luce—perhaps not a household name now, but an enormously influential figure in his era—argued that the United States needed to accept its role as "a dominant power in the world" and that the 20th century "must be to a significant degree an American Century."

Dower's point in making Luce's catch-phrase the title of his book is that it turned out to be prophetic. Less than a year after his essay was published, Pearl Harbor forced the United States off the sidelines and into World War II. That war did permanently end the isolationist era and make the role of a dominant power a central piece of American identity, a role we have played, and gloried in, ever since.

That history—what America has done in the world from 1945 to the present and how those actions have shaped American institutions and character—is one of The Violent American Century's two principal themes. The other is the broader history of the century itself, and "the breadth, scale, and variety of global conflict and war-related death, suffering, and trauma" in the world since the end of World War II.

(Here's a number that tells how grim that broader story still is: 65 million. That's the current worldwide count of people—men, women, and children—who have been forced to leave their homes, mostly fleeing from violence, and remain displaced. It's the highest number recorded in the post-World War II era.)

In chronicling those decades, Dower makes clear that his history covers the full range of wars, including plenty of conflicts the United States was not involved in. But he also makes irrefutably clear that America has a lot of violence to answer for, and that its conduct in its wars and other military operations is a much darker story than the self-righteous legend Americans so consistently tell themselves.

Dower, a distinguished historian best known for his works on the Pacific theater in World War II, builds his arguments on facts, not ideology. Indeed, for such a slim book on so broad a subject, The Violent American Century is astonishingly rich in historical detail, putting a solid foundation of evidence under the author's conclusions and giving more persuasive force to his logic.

It's a good bet that even readers who would like to resist Dower's critical judgments on U.S. policies and actions, as some surely will, may fairly often find themselves unable to dispute his facts and unwillingly thinking, as they read, I didn't know that, or I never thought about it that way.

A major strength of this book is that it stays away from simplistic formulations and ideologically inspired assumptions that typically contribute more to partisan myth than historical knowledge. Dower does not apply a moral double standard or sentimentalize America's opponents, as progressives often inexplicably do, or toss out meaningless clichés about imperialist aggression and capitalist greed. Instead he offers a much more thoughtful and plausible analysis, examining the events, cultural forces, ideas and institutions that have shaped America's role in the conflicts of the post-World War II era.

An important thread in that critique is that the United States, mesmerized with its own military and technological and economic power and convinced of its moral superiority, keeps imagining a much greater mastery of events than it actually has (and that it has a right to that mastery, to boot). Cocooned in "triumphalism and righteousness," Americans have been unable to see not only the limits of their power but the real consequences of their actions, domestically and internationally.

At home, Dower observes, American leaders and particularly the architects of the post-9/11 "long war" against terrorism failed to recognize "the political harm done to democracy by creating a gargantuan national security state devoted to perpetuating a state of semi-war; the huge fiscal costs that had been incurred for decades to come by a hubristic and disproportionate response to a single day of terror."

When Americans look outward, he notes, the mania for absolute, comprehensive supremacy similarly creates a blind spot: "One grave pitfall of obsessive immersion in self-centered 'defense' thinking is that resultant policies are commonly, and not unreasonably, seen as threatening by others. The ceaseless U.S. quest to maintain massive 'technological asymmetry' militarily is guaranteed to keep arms races of every sort going."

Cumulatively, this book expresses a profoundly critical view of U.S. actions in the world since World War II. It also leaves no doubt that the author is a skilled writer who chooses his words carefully. Put those thoughts together and one can guess that the ambiguity in the title might not have been accidental after all. Literally it refers to Henry Luce's essay, but the message about American policy was probably meant to be there, too.

Once in a while, The Violent American Century brings the reader up short even on an idea or belief that one thought of as completely settled. Most readers, for example, probably take it as axiomatic that the United States represented better principles than the Soviet Union and its satellites, even if American actions in the Cold War were not always virtuous. Dower does not contradict that premise. But at the end of his chapter on U.S. involvement in Latin America in the 1960s, ’70s and ’80s, when Washington backed a variety of very unpleasant regimes against real or supposed Communist threats, Dower lobs these sentences (quoted from the historian John Coatsworth) at his readers:

"Between 1960, by which time the Soviets had dismantled Stalin's gulags, and the Soviet collapse in 1990, the numbers of political prisoners, torture victims, and executions of nonviolent political dissenters in Latin America vastly exceeded those in the Soviet Union and its East European satellites. In other words, from 1960 to 1990, the Soviet bloc as a whole was less repressive, measured in terms of human victims, than many individual Latin American countries."

That is, our allies—countries we supported diplomatically and financially, where we gave substantial amounts of money and arms and training to their armies and police, that we proclaimed were on our side in the international struggle for democracy and against Communism—were worse violators of democratic values, human rights and the rule of law than our principal enemy? Worse offenders against the principles we claimed to believe in than the Soviet Union?

Disconcerting. But true. And, like many other uncomfortable facts in this book, impossible to ignore.