The Vintner's Apprentice: An Insider's Guide to the Art and Craft of Wine Making, Taught by the Masters 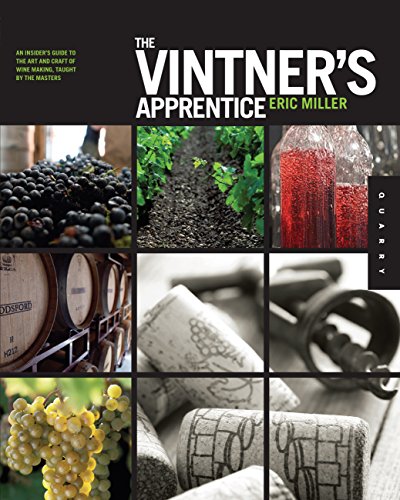 When traveling through Pennsylvania Wine Country, one encounters a number of unexceptional wines. But then one arrives at Chaddsford Winery, in the Brandywine Valley outside of Philadelphia, and one comes upon some world-class wines. How do they do it?

Eric Miller, the owner of Chaddsford, has written a book about wine making. The Vintner’s Apprentice is subtitled “An Insider’s Guide to the Art and Craft of Wine Making, Taught by the Masters,” and one approaches the book hoping that Miller will reveal some of his secrets. The Foreword by Kevin Zraly (of Windows on the World Complete Wine Course fame) suggests that this will be the go-to book for budding wine makers to “understand where to plant grapes (soil types, weather and wine conditions), what grapes to plant (Vitis vinifera, Vitis labrusca, hybrids), and what you can expect to achieve in the final product.”

Nobody who is seriously interested in starting a vineyard and/or a winery, however, would want to rely on The Vintner’s Apprentice as a primary source on how to do it. This book’s target audience is much wider—people who like wine who would like to know more about all the steps that go into making wine, while letting someone else do the growing of the grapes and the making of the wine. For this audience, the book provides a reader-friendly guide to the process, giving enough detail that one can ask intelligent questions of the pourers in the winery tasting room. In the right circumstances, this can lead to being referred to someone higher up in the winery, someone who may then open up some of the better stuff. So it’s knowledge well worth gaining, even if one is not going to start a winery.

Eric Miller grew up in Upstate New York in a family steeped in wine culture. His father would blind taste him on wine. “By the age of eight, I had graduated from identifying whether a wine was from Burgundy or Bordeaux and was on to the greater challenge of telling whether it was red or white.” His adolescence was spent in a number of different countries, including some time in the Burgundy region of France.

At 19, he was bored with college and ended up working on his father’s newly planted vineyard, Benmarl, in the Hudson Valley. His father’s winery and “Société des Vignerons” attracted Manhattan’s wine elite, and he was totally hooked on wine. Instead of moving out to California, he wanted to find a place in the Mid-Atlantic. He settled on Chadds Ford, Pennsylvania, where he founded Chaddsford Winery in 1982—and has been there ever since.

One would love to know what he found so special about this area, how he decided to plant Cabernet Sauvignon on this site, Pinot Noir at that site, and Chambourcin over on that site, and how he decided that, no, actually Chardonnay would be better on that site. But his chapter on Selecting a Site is general, indicating that one needs to consider climate, topography, soils, and how they interact, without going into great detail. He then has a more extensive interview with Lucie Morton, a vineyard consultant.

The rest of The Vintner’s Apprentice follows this format. Miller discusses the considerations of choosing grape varieties, planting the vineyard, maintaining the vineyard throughout the growing season, and harvesting the grapes. He then moves into the winery, covering crushing, fermenting, blending, aging, and bottling the wine.

Each section contains several pages of text, interspersed among copious, beautiful photographs with captions, and is followed by an extended interview with someone in the wine business focused on the subject of the proceeding section. For example, following the section on blending wines, Miller interviews Pauline Vauthier, winemaker at the top Saint-Émilion estate of Château Ausone, where she discusses the decisions she makes in determining the final blend of that wine and the other properties she oversees. One can only be envious of the places Miller gets to go, the people he gets to meet, and the wines he gets to drink, all in a day’s work.

If reading The Vintner’s Apprentice whets your appetite, and you find yourself deciding to give it a go making your own wine, the back of the book includes a handy list of resources, such as suppliers of winemaking supplies and equipment, vineyard supplies, grapevine nurseries, and grape and juice suppliers. Also included is a list of books dealing specifically with grape growing and wine making that should definitely be consulted before proceeding further with a wine making venture.

The Vintner’s Apprentice is a clearly-written, fun-to-read book by someone who knows much more about the subject than he reveals here. Budding winery owners should look elsewhere, but for the rest of us this is as good an introduction to the grape-growing and wine-making process as we have seen.