A Vine in the Blood 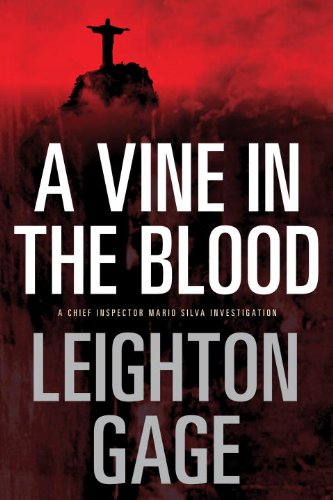 “A Vine in the Blood is a hell of a lot of fun. It is a work that appeals to the senses, in particular visually. . . . Mr. Gage is a master of the procedural who paints with a fine brush, using the tools he needs to craft a fine novel—and no more.”

A Vine in the Blood is the fifth novel in Leighton Gage’s Chief Inspector Mario Silva Investigation series. As always, Mr. Gage has used a Bible passage as a title, in this instance Ezekial 19:10. “Thy mother is like a vine in thine blood.”

Mr. Gage is an American expat, married to a Brazilian, and with the zeal of a convert, it’s apparent that Brazil has become a home for him that he clearly knows and loves.

Brazil is an underutilized resource as an international crime novel setting, yet it lends itself perfectly to the genre. The country is home to a number of natural wonders: The Amazon is the world’s longest and oldest river. The rainforest gives a home to a third of the species-types on the planet, and between land and water, the country’s ecosystem and habitats support more creatures than anywhere on Earth. Both the Amazon and Iguaca Falls are among the Seven Natural Wonders of the World.

Against this backdrop of beauty, Mr. Gage shows us a society rife with corruption, where violence and exploitation are the norm. A place where the gap between the rich and poor is vast. Where more police are killed in the line of duty each year than in the entire collective English-speaking world. Brazil has “the best legal system money can buy,” and a popular expression is, “The rich don’t go to jail.” Indeed, prisoners frequently “escape” from prison by bribing guards and walking out the gates

According to Mr. Gage, the police by and large are corrupt, as are many judges, prosecutors, prison officials, and politicians. He isn’t exaggerating. Of late, a female judge was murdered by the police she was investigating, and three of the President’s chief ministers have been dismissed for accepting bribes.

Brazil has no specialization of police along the lines of the U.S. law enforcement system, with its Homeland Security, DEA, ATF, FBI, etc. All these areas fall under the auspices of the Federal Police, considered the least corrupt of Brazilian cops, and in which Mr. Gage’s protagonist, Mario Silva, is a chief inspector. This national mandate serves the series well, allowing Silva to take on a wide variety of criminal investigations, while although they sometimes take him around Brazil, through Silva’s eyes, we mostly gain insight into São Paolo, the seventh largest city on the planet and Silva’s base of operations.

In A Vine in the Blood, Mr. Gage exposes daily life for the citizens of São Paolo: The illegal numbers lottery run by criminal organizations that has preoccupied and entertained its citizens for over a century, to the fates of those determined to bring justice the nation, like the judge who is in self-imposed incarceration in his own courthouse, a million dollar bounty on his head.

Silva deals with crime and injustice in the only way he can, if he’s to both stay alive and maintain his sanity. Rather than going after kingpins of crime—an impossibility (in fact, he tries to maintain good relations with some of them, so that he can turn to them for favors and information)—he does the best he can and reels in smaller fish. He takes an “I didn’t create this world, I just live in it,” attitude, and accepts that there are limits to what he may accomplish. And for his own inner peace, he maintains a dark sense of humor that both livens the text and keeps his audience from falling too deeply into the feeling of hopelessness that less fortunate, impoverished citizens surely must live and breathe.

This acceptance extends to his personal life. Silva’s wife is an alcoholic, emotionally destroyed by the death of their child. He loves her no less for her weakness, and his sympathy for her brings great empathy from us for him. Silva’s acceptance of life is in large part the source of his charisma.

A Vine in the Blood opens in the home of Juraci Santos, mother of Tico “The Artist” Santos, Brazilian soccer hero and perhaps the world’s best striker. Juraci is missing; her two maids have been executed. Brazil is to play Argentina, their archrival, in the World Cup, the world’s premier sporting event, and the performance of The Artist is essential to the outcome of the game.

To lend perspective to the importance of the World Cup to the Brazilian national psyche: Brazil is the only country to have participated in every World Cup, and the only one to have won it five times. More countries participate in the qualifying rounds than have been admitted to membership in the United Nations. More than a billion people will watch the finale on television. A victory in the final game will be celebrated by millions. A loss will cause a national depression so severe that the ignominy has brought on suicides. It’s far more than a game, but a matter of national honor. The novel has an element of true crime, as the same happened to three Brazilian players in the last World Cup in South Africa in 2010.

The plot is too tightly woven to allow for a lengthy synopsis without spoilers. It suffices to share a few key points. The kidnappers demand five million, to be paid in diamonds of equal value. No one believes at any time that the murder-kidnapping was committed because of Juraci herself. All believe the crime was perpetrated for the same reason: to put The Artist off his game. He has good reason to be distraught. Having already committed two murders, Juraci’s kidnappers have no incentive to let her live, whether the ransom is paid or not.

Suspects abound. Fortunes will be made (and lost) that far exceed a paltry five million. The outcome of the game will determine who makes them. Could bookies or gamblers have abducted Juraci to skew the odds? Many are of the opinion that no Brazilian man would do anything so unpatriotic as to jeopardize the game over mere money. Therefore, they believe the criminals must be Argentinians, who, after having lost to Brazil in the last three championship games, will do anything to restore their natural pride.

The beautiful model and The Artist’s girlfriend, Cintia Tadesco, is an evil, gold-digging bitch with no conscience. Evidence including a missing key suggests an inside job. Could she have been involved?

All of Brazil is outraged and waiting with bated breath for the return of Juraci and the restoration of The Artist’s peace of mind. National honor and its resultant pressure rests on the shoulders of Mario Silva and his team.

The novel resolves with a ransom delivery scheme that is original, well thought out, and surprising to the point of feeling whimsical. In short, A Vine in the Blood is a hell of a lot of fun. It is a work that appeals to the senses, in particular visually. Although by no means light reading, it isn’t as dark as some of Leighton Gage’s other works. The reason? Mr. Gage is a master of the procedural who paints with a fine brush, using the tools he needs to craft a fine novel—and no more.

Mr. Gage’s ardent fans needn’t worry. Two more Mario Silva novels are already scheduled for U.S. publication. Perfect Hatred, the sixth in the series, will be released in December of 2012; and The Ways of Evil Men, the seventh, in December of 2013.