The Village: 400 Years of Beats and Bohemians, Radicals and Rogues, a History of Greenwich Village 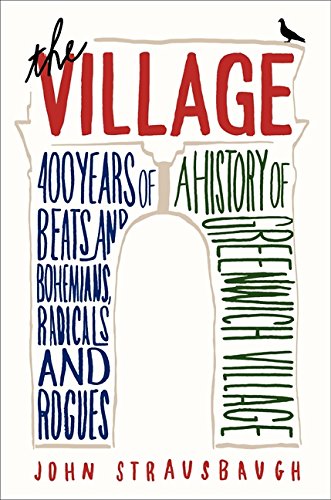 Prepare yourself for a great walking tour of Greenwich Village through historical periods and many changing landscape. Wear good shoes and bring a camera, for the book is almost exhausting in its coverage. Also bring a good map, as the author and editors provide none and surprisingly too few historical photographs.

The first thing to do is Google a good map and print it, for John Strausbaugh refers to streets and locations on every page. For images he substitutes his detailed and comprehensive historical research of the place and its personalities enhanced by his storytelling ability and some beautifully descriptive detail, as in:

“In the decades before every college campus was anode of international counterculture, when gay and lesbian life was tightly closeted, when just wanting to make art or literature was a sign of abnormality, Greenwich Village was a crumb of the American social landscape where they felt free to live according to what they believed were their true natures. Inevitably some of them turned liberty to libertinage. Exploring beyond the bounds of traditional social behavior and contemporary morals, they drank prodigiously, soaked up drugs, and threw nonstop orgies. William Burroughs once asked, ‘What happens when there is no limit? What is the fate of The Land Where Anything Goes?’ . . . . In Village lore self-destruction was often revered as martyrdom. Though this seems misguided, we should resist judging the extremists too harshly by the very standards they intentionally, even conscientiously, flouted.”

And so there is color and heroics, tragedy and irony in the story of this American Mecca of creativity where artists, writers, photographers, journalists, and counterculture so often flourished.

While warning us that “The history of Greenwich Village, like the history of New York City as a whole, is fantastically deep, layered, fragmented and fractal,” our guide author Strausbaugh pushes on capturing well the evolving spirit of the place. He often groups his narrative into decade chapters, and yet even with over 600 pages, there is scant time for some figures and places. Certainly key figures are presented, beginning with radical Thomas Paine in the mid-1700s when the Village was still rising from a bucolic countryside of New Amsterdam into what our author aptly calls “A Magnet for Misfits.”

As the Village evolves into America’s Left Bank, we hear stories of Edgar Allan Poe’s residence and of course by the mid-1800s tales of legendary Bohemian Walt Whitman. In the later “Restless Nineties” we learn of Stephen Crane and by the 1900 the imposing female figures of Mabel Dodge, Margaret Sanger, Dorothy Day, Edna St. Vincent Millay and later Willa Cather, Djuna Barnes, and Anais Nin.

To capture the radical flavor of the time and place in the early 1900s Mr. Strausbaugh aptly reprints the mission statement of The Masses publication: A MAGAZINE WITH A SENSE OF HUMOR AND NO RESPECT FOR THE RESPECTABLE: FRANK, ARROGANT, INPERTINENT, SEARCHING FOR THE TRUE SAUSES: A MAGAZINE DIRECTED AGAINST RIGIDITY AND DOGMA WHEREVER IT IS FOUND: PRINTING WHAT IS TOO NAKED OR TRUE FOR A MONEY-MAKING PRESS: A MAGAZINE WHOSE FINAL POLICY IS TO DO AS IT PLEASES AN CONCILIATE NOBODY, NOT EVEN ITS READERS.

The book is full of apt quotes like this to keep the spirit of the place alive, lines Mr. Strausbaugh must have used from his decades as host of the New York Times’ Weekend Explorer Series.

Ultimately our guide takes us through the 1950s and 1960s and later decades when Allen Ginsberg and the Beats found their home here, along with Abstract Expressionist painters like Jackson Pollock, authors like Norman Mailer, E. E. Cummings, Kenneth Patchen, and Jack Kerouac and such jazzmen as John Coltrane and Miles Davis along with such fellow musical originals as Bob Dylan and Jimi Hendrix.

Mr. Strausbaugh portrays how decade after decade the Village has served as “a cultural engine—a zone that attracts and nurtures creative people, radicals, visionaries, misfits, life adventurers. Coming together in one place they collide, collaborate, fuse, and feud like energetic particles in an accelerator, creating work and developing ideas that change the culture of the world.”

The Village is a huge cultural saga worth having and keeping, unforgettable as a reminder of who we have been and still are.