The Viking Heart: How Scandinavians Conquered the World 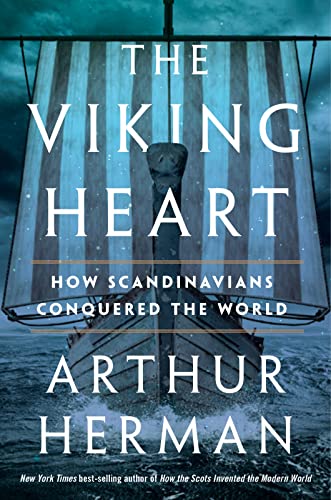 “This . . . is much more than a book about Vikings. It is a historical tour de force that ranges over 13 centuries of Scandinavian history, beginning with the seafaring raids of the Vikings in the eighth century and ending with the post-World War II economic successes of the Scandinavian countries.”

Arthur Herman is one of the best and most courageous modern historians. Several years ago, he wrote a fair, some would say sympathetic, biography of Senator Joseph McCarthy. His recent biography of General Douglas MacArthur is an outstanding example of revisionist history/biography that challenges the conventional views of MacArthur’s role in the Bonus Army debacle, his generalship during the Korean War, the Truman-MacArthur showdown, and other controversial aspects of the general’s life and career.

In his latest book, Herman presents a more balanced view of the role of the Vikings in history and shows how their Scandinavian descendants positively impacted world history.

Herman acknowledges that The Viking Heart was both “a deeply personal as well as historical journey.” Herman is of Scandinavian (Norwegian) descent, and after his book How the Scots Invented the Modern World was published, one of his uncles suggested that he write a book about Vikings.

This book, however, is much more than a book about Vikings. It is a historical tour de force that ranges over 13 centuries of Scandinavian history, beginning with the seafaring raids of the Vikings in the eighth century and ending with the post-World War II economic successes of the Scandinavian countries.

Herman identifies the extraordinary human qualities of the Vikings and their descendants in Denmark, Norway, Sweden, and Finland that manifested themselves throughout this time period: physical courage, fierce loyalty to family and community, resourcefulness, a commitment to their cultural identity and traditions, respect for nature, compassion, conscience and moral discipline (after their conversion to Christianity), a tremendous work ethic, a belief in individual freedom, and a willingness to explore new frontiers.

These positive qualities did not all appear at once. Herman does not shy away from the more deplorable aspects of the Vikings--violent raids, extreme pillaging, massacres of innocents, piracy, slave trading, treachery, betrayal, and other human failings. There is a reason that European history during the time of the Vikings was called the Dark Ages.

But the Vikings also became settlers, farmers, merchants, traders, and manufacturers. And the impact of Christianity, Herman writes, made the Norsemen “a constructive, rather than destructive, force in Western civilization.” This is the story that Herman tells. It is not a tale of linear human progress, but it nevertheless shows that human societies can at times overcome their worst characteristics.

The Viking-Scandinavian legacy that Herman writes about includes the occupation of England by William the Conqueror; the establishment of Kievan Rus’—the precursor to the Russian empire; the seeds of what became the Protestant Reformation; the establishment of the independent countries of Sweden, Norway, Denmark, Finland, Iceland, and Greenland; the geopolitical revolution in Europe sparked by Gustavus Adolphus’ Swedish empire and Gustavus’ brilliant military innovations; and the contribution of Scandinavian immigrants to America’s rise and greatness.

There were Scandinavian heroes and villains—but more heroes than villains, with some playing both roles. Perhaps the most notorious Scandinavian villain was Norway’s Vidkun Quisling who embraced Naziism during the Second World War.

Herman discusses both the heroism and the villainy of aviator Charles Lindbergh (solo flight across the Atlantic and distinguished war record, but early outspoken opponent of fighting Hitler), and sculptor John Borglum (sculptor of Mount Rushmore with ties to the KKK), neither of whom, he writes, “conquered the prejudice in his soul.” “We can look back with awe on the accomplishments of these men,” Herman explains, “[b]ut if we are looking for inspiring values, we have to search elsewhere.”

Herman’s Scandinavian heroes include Wisconsin volunteers who fought for the Union at Shiloh, Stones River, and Chickamauga during the American Civil War; Jacob Riis, a Dane who became an American journalist who championed needed reforms during the industrial revolution; Fridtjof Nansen, a Norwegian who helped alleviate famine in Russia after the First World War; Raoul Wallenberg, a Swede who helped tens of thousands of Jews avoid Hitler’s Final Solution; Norwegian commandos who obstructed Nazi Germany’s efforts to build an atomic bomb; Bill Knudsen and Charles Sorensen, ethnic Danes who helped the United States become the “arsenal of democracy” in World War II; and Norman Borlaug, the child of Norwegian immigrants who helped produce the Green Revolution in agriculture that fed the world.