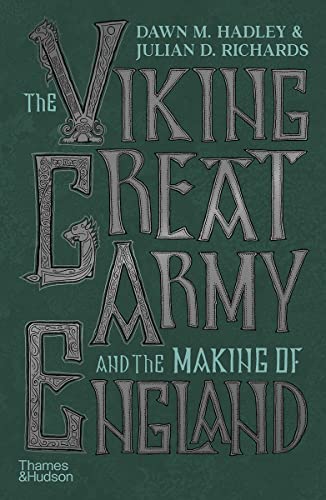 “England sleeps still from valley to hill.” That’s a line from a song by Amazing Blondel, a British group that imagined an Arcadian rural past. It could be said to describe the loose-knit group of Christian kingdoms that existed circa 864, just before the invasion of what the authors call the Viking Great Army.

Although much of what’s written about the Vikings is inaccurate—they didn’t wear horned helmets, for instance, and their physical appearance is unclear—the popular image of pillagers, murderers, and rapists is more or less true when it comes to their invasion of England. The authors reconstruct the history—which is very sketchy in the written record—from archaeological finds of coins, jewelry, strap ends, game pieces, and other flotsam. It’s not surprising—they’re both archaeologists at the University of York.

The Vikings had raided England before 865, but in the period under study their methods changed—it wasn’t a quick in and out, followed by a return to Scandinavia with silver and slaves. They stayed put over the long winters, and then took Anglo-Saxon wives, farmed, and became integrated into the kingdoms they conquered and put to the sword.

It would have been useful to hear more about how that integration happened, because the invaders were barbarous in contemporary accounts. This is from the ninth century monk Abbo (the attack is on Paris, but it’s representative): “Then, the cruel ones, both on horseback and on foot overran the hills, the fields, forests, open pastures and the villages. All infants, boys and girls, youths, and even those hoary with age, the fathers and the sons and even mothers—they killed them all. They slaughtered the husband before the very eyes of his wife; the children perished right before the eyes of their parents.”

Many of the accounts are from churchmen, because the churches were a prime target of Viking pillage, as well as contempt. Another French account, from a bishop, “They devoured with their impatient swords all the beauty of that paradisiacal region, which is watered throughout by the River Seine, and gave up everything to a devouring flame.” Did they later make a bid for public acceptance by helping rebuild the communities they destroyed?

It would be great say that the book is full of such colorful accounts, but unfortunately it isn’t. Most of the text is about the artifacts dug up and what they tell about Vikings, who seemed to be forever burying caches—or just dropping them carelessly, never to return.

The Viking Great Army landed in East Anglia in 865. The authors estimate it included several thousand warriors, the largest military force seen so far. They made and broke peace treaties, killed at least four Anglo-Saxon kings (and a lot of innocent people, too) and refused to go back home with their growing stack of plunder. This period is little documented (though the Anglo-Saxon Chronicle of 865 references “a great heathen army”), so the book is a very valuable addition to the historical record.

The authors’ principal area of study are the probable winter camps of the Great Army at Reading in Berkshire, in 1870–71; and Torksey in 872–73.  The camps had roads, and the authors describe (in the type of vivid and imaginative passage that is quite welcome, but not frequent in the book) “a hustle and bustle of activity, and an array of smells and sounds. Here were the booths of traders and craftworkers. Along one street were blacksmiths, forging new rivets for the ships, but for a few coins they were also willing to sharpen a knife or sword. It was noisy here with the sound of metal grinding against stone, and the air was smoky as they pumped their bellows, making the flames dance above their forges.”

Now we don’t know if the flames really danced, but a little poetic license is granted. No imagination is needed for a grisly murder scene brought to life by the skeletal evidence—a woman aged 30 to 40 and her child, hacked to death by the Vikings in Holland circa 882.

The Viking blacksmiths also made coins at their winter camps, and those are among the finds that allow the authors to play detective about the army’s movements. They are careful researchers, who participated in some of the digs they chronicle, and what they find allows the creation of maps and charts of the army’s movements (included in the book, along with many photographs of the finds). Here are sword hits, shield clamps, Islamic coinage (cut into pieces), and also Viking burial sites.

The book documents earlier excavations, not always undertaken with the best intentions. And it corrects some previous assumptions. As to “the making of England,” that’s down to the (forced) introduction of Viking blood lines, culture, traditions, and place names. It led to a more united England, and also to an increased urbanization. A town-based pottery industry that grew up in the army’s wake is another influence, and here we get another human touch—an account of a potter, the descendant of a Great Army fellow traveler, who was forced to relocate (from Torksey to the town of Newark-on-Trend) by a new Norse threat, around 975.

The authors conclude, “Now that we understand the immense size of the winter camps, and the wide range of activities there, we are able to grasp the Army’s impact on the places it visited. . . . Our story has shown how a quest for silver and slaves became a quest for land, how warriors became settlers and entrepreneurs, and how a late ninth century Viking army came to have a long-lasting impact on the making of a nation.” Fair enough. If you want the blood, guts and viscera, historical fiction is waiting for you.