The View from the Cheap Seats: Selected Nonfiction 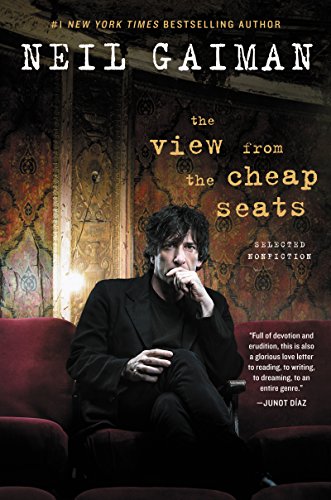 Neil Gaiman established himself long ago as sort of a literary jack of all trades. He first came to prominence (if a comic book author can ever be said to “come to prominence”) as the creator of DC’s Sandman during that era (the ’80s) in which “graphic novels” were born, comic book writers became auteurs, and Alan Moore’s Watchmen and Frank Miller’s Batman Returns and, yes, Sandman, straddled the Earth—colossuses all.

From there, he went on to write novels like Good Omens, an underappreciated apocalyptic fantasy which Gaiman co-wrote with Terry Pratchett long before the rest of us were pondering the apocalypse.

Then he turned his attention to children’s books—although Gaiman’s point of view is that there is little difference between books written for the young and those authored for the old.

Over the years, during which he published enough fiction to fill a library, he also churned out a million or more intros to books by friends, interviews with those friends, and others, as well as appreciations of the works by authors of all sorts, and speeches for all occasions, including “Make Good Art,” a 2012 commencement speech that he gave to the graduates of the University of the Arts, in which he stated:

“Life is sometimes hard. Things go wrong, in life and in love and in business and in friendship and in health and in all the other ways that life can go wrong. And when things get tough, this is what you should do.

For those for whom Gaiman is an unknown quantity, “Make Good Art” serves as an excellent introduction, with its rat-a-tattiness and its imaginative references to mutated snakes, also for the author’s passion for the arts—especially the literary arts.

That speech, and a million others like it, as well as those book introductions and author interviews and appreciations of authors extant and authors deceased have now all been gathered together into one volume and given the aggregate title The View from the Cheap Seats.

Cheap Seats is both fun and fast—a beach read that requires neither sun nor sand.

As a book—sort of a rag-tag gathering of bits and bobs: the oddities that are the speeches given and revived on the printed page, the strange happenings that are the interviews undertaken by a man who hates writing them nearly as much as he reportedly does giving them (and yet, Gaiman’s piece on Stephen King is perhaps the best thing in the book), as well as a number of apropos-of-nothing considerations of this or that—well, it is, all together, utterly what one may call “Gaimanesque”—a term referenced in the book itself and a word that our author claims not to understand.

For the reader, then, as well as for the author himself, the word references a style of writing infused with good humor and a graceful, dancerly pace, in which the ice coating the lake underneath our feet is always ever so slightly too thin, and menace, even disturbing violence is everywhere, like eyes in the darkness shining as we cling tightly to our campfire.

He writes little sentences like this:  “Life has a sense of humor, but then again, so does death,” which amuse, and then unnerve, and then amuse once again.

Gaimanesque is also a term that references as certain muscularity of writing and content that never apologizes for itself or takes time to wait for the slow readers who may be wishing for a little more explanation and a little less experimentation.

And then there’s Gaiman’s love of rock music and those who make it.

Like this, from “Waiting for the Man: Lou Reed:”

“When I was about fourteen I found a copy of a Lou Reed lyrics book in my local bookshop. It was a cheaply bound mimeoed affair, with a stippled caricature of Lou shooting up on the flimsy cover: pirate publishing.

“I wanted it so badly, but I couldn’t afford it (and the police had just busted up a junior shoplifting ring at my school and I’d had to return a copy of Lou Reed Live that Jim Hutchens—the John Dillinger of the ninth grade—had obtained for me at a price significantly less than the record store was asking, so even that option was kind of out).

“I stood and read it in the shop, typos and all. Went back for it a couple days later, but it was gone.

“I’ve been looking for it ever since.”

On display, there’s also Gaiman’s love for pop culture (the titular essay, “The View from the Cheap Seats,” his chunky little memoir of an evening at the Oscars after the film of Coraline became a success is a nearly perfect thing with churning bits of agony and ecstasy, like this: “I stare at the woman in front of me. She has blond hair and a face that’s strangely fishlike, a scary-sweet plastic surgery face.”), and for education (the volume includes tributes to both libraries and bookstores), and, of course, for authors.

Like this little moment of love for a master of science fiction and fantasy:

“I knew Ray Bradbury for the last thirty years of his life, and I was so lucky. He was funny and gentle and always (even at the end, when he was so old he was blind and wheelchair-bound, even then) enthusiastic. He cared, completely and utterly, about things. He cared about toys and childhood and film. He cared about books. He cared about stories.”

The fear here is that Cheap Seats is not for everyone. That for those who are not already in tune with the man, the book might seem a slight thing, a volume of detritus culled from an author’s trashcan. As if the contents were the cheap seats themselves.

The only litmus test I can offer is that if merely reading the name Neil Gaiman conjures in the reader’s mind myriad moments of pleasure from any of the many genres in which he’s dipped his pen, then this book is likely to be a source of great pleasure. If the name means nothing, then this is not your entry point.

Try Coraline instead and go from there.