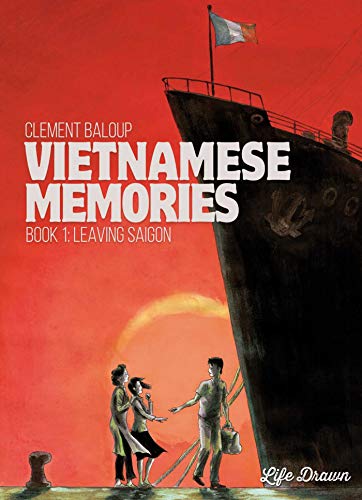 Vietnamese Memories by Clement Baloup starts as a series of memories of the Vietnam War, different men, now living in France, telling how they left Saigon at the end of the war. The stories are dramatic and poignant, but reading one after another begins to numb the reader to the drama as they start to sound inevitably similar. Part of the problem is that these are all men of roughly the same age talking. Only the final story is from a woman's point of view. There isn't the range of ages and experiences that could make these stories a rich tapestry, though the narrators bear important witness to the ravages of war and the echoes of colonialism on their country.

The second half of the book is an entirely different story. No longer about fleeing the chaos of war, the book focuses on a forgotten chapter in France's history as a colonial power, a time during WWII when Vietnamese were forcibly taken from their country to work in war-torn France, desperate for more laborers as the native workforce headed off to battle. Here the vivid details and rich art finally bring the book to life, perhaps because the first half covers familiar territory while the second has the thrill of a detective hunt.

The point of view changes as now the narrator is a freelance reporter for the French leftist newspaper, Liberation. The reporter thinks he's found a good story when he hears of workers occupying the Lustucru Food factory in nearby Arles. Dutifully, he goes to the factory where pasta and rice are packaged to ask about the workers' demands and the permanent closure the owners are threatening. To get a more human face to the story, he looks for some rice growers to talk to and that's where the story changes.

By the side of road, he sees a Museum of Rice in Arles and stumbles on a photo that intrigues him of Indochinese farmers reviving the local rice industry. Tracking down the history behind the image, the reporter learns of Vietnamese men forced into work far off overseas and of how a entire crop industry is revitalized by these farmers. The author-illustrator of the graphic novel worked closely with the reporter, Pierre Daum, to bring this forgotten bit of history to life through interviews and research. This is where the book shines and the use of the graphic format works well to present complex information easily and forcefully, a good addition to the growing canon of forgotten voices finally speaking out.