Victory at Sea: Naval Power and the Transformation of the Global Order in World War II 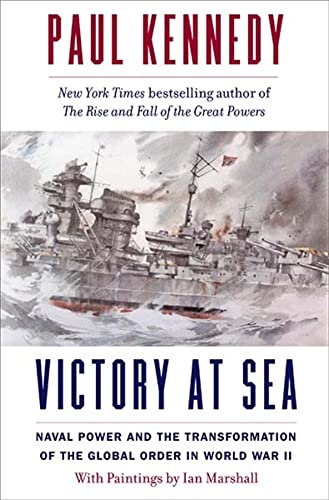 “This gorgeous watercolor-illustrated one-volume history of the rise of American naval power in World War II captures the desperate struggle of war at sea and its pivotal importance for the transformation of a Eurocentric world to one of American dominance.”

In the great tradition of American authors on the importance of geography, navies, trade, economics, and sea power such as the classic work by Alfred Thayer Mahan, The Influence of Sea Power Upon History, 1660–1783, Paul Kennedy’s new book Victory at Sea may be considered a just addition to the ranks of classics.

The title surely reminds us of one of the best World War II documentary series ever made, the homonymous Victory at Sea, broadcast by NBC in 26 episodes in 1952–53. Kennedy’s book is unequivocally of the same high caliber in this important work on the naval war of World War II and, importantly, how it transformed the world order and power centers.

Kennedy, the J. Richardson Dilworth Professor of History and director of International Security Studies at Yale University, wrote an instant classic for the library of naval history, indeed, for history in general. This gorgeous watercolor-illustrated one-volume history of the rise of American naval power in World War II captures the desperate struggle of war at sea and its pivotal importance for the transformation of a Eurocentric world to one of American dominance.

Kennedy came to prominence after the publication of his book The Rise and Fall of Great Powers: Economic Change and Military Conflict from 1500 to 2000, in 1987. He argued that great powers, in order to remain great powers, had to balance wealth and their economic base with their military power and strategic commitments. He had a short section in the book on America leading reviewers to believe Kennedy overreached and was predicting the decline of America. Critics pointed out that defense spending is not necessarily an unproductive drain on an economy and that the American “empire” was fundamentally different from past empires. They thought Kennedy’s arguments were broad brush strokes and deterministic, ignoring the role of choice and luck.

In his latest book, it would be hard to see how those previous criticisms would apply. In Kennedy’s words “Victory at Sea is about warships and navies, from beginning to end, but it is also about the extraordinary shift in Great Power history.” Like many great historians, Kennedy admits his philosophical debt to that seminal work of the great French scholar Fernand Braudel, The Mediterranean and The Mediterranean World in the Age of Philip II on his conception of the structural changes wrought by naval battles, ship production, individual warships and its foundation.

Just as Braudel reminds the reader that in the 16th century the centers of production and the pace of events was moving toward northwest Europe and the Atlantic, so, too, Kennedy looks at the 20th century as a primarily European centered international order shifting outward toward a new power in America. Fans of Braudel will notice the French historian’s language pop up occasionally.

Part I, the first three chapters, is written with the general reader in mind and sets the stage by discussing the elements of geography and economic power, introducing some of the classic theories about understanding sea power. Warship designers had important questions and difficult decisions to make. Should the ship have turbine engines for speed, or diesel for range? Should it build fuel tanks for an endurance of just 4000 miles at a steady speed or create more space for a range of 12,000 miles? Should it protect the upper levels from horizontal fire and its decks and turret tops from vertical fire, even if that increased the superstructure tonnage and made the vessel top heavy in North Atlantic storms? It is fascinating to learn why cruisers turned in a mixed performance in World War II—everybody’s cruisers (perhaps excepting the British)!

The next three chapters of Part II are more substantive and narrate the Great War at sea up until its turning point. This is a “history of events” in Braudelian-speak. Kennedy tells the thrilling story of the struggle for naval mastery fought so fiercely in 1941–42, with the Royal Navy on the brink of defeat and the Americans devastated at Pearl Harbor and down to a single fleet aircraft carrier.

Even a well-read naval history buff might be surprised to learn that when the battleship HMS Rodney was detached from a western convoy on May 29, 1941, to join in the hunt for the Bismarck, it had on board the assistant US naval attaché Lieutenant Commander Joseph Wellings, who was returning to Washington to report on his time in London. Wellings had a ringside seat to the sinking of the Bismarck. At the same time President Roosevelt was publicly asserting that his chief aim was to keep the then neutral America out of the war

In Part III come the extraordinary changes of 1943 based on two elements, sea power and a productivity revolution. Kennedy writes:

“what is even more fascinating about this story, to the scholar of causal links between daily fighting on the one hand and the deeper structures of war on the other, is that the change of Allied fortunes in the struggle against the U-boats represents perhaps the best example-- better even than the reinforcement of new American warships arriving at Pearl Harbor in the same year—of where vast improvements in one side's material technological power at the base really did translate into sustained changes at the top, in the battleground itself, at the hard edge of war [italics in original]. Because the base itself moved, the respective position and fortune of the national contenders also altered. Marx and Braudel would have been delighted to know this.

The pivotal chapter 8 tells the story of this extraordinary productive muscle of the Americans.

Kennedy modestly and correctly says there was nothing simple about all that is described in those first three chapters. The roles of geography, economics, and technology, the interrelationships between them all, and then the relationship of each to sea power make hard any attempt at synthesis in generalization, although this is exactly what Mahan did—and Mahan’s influence on admirals everywhere was great.

In the previously mentioned chapter 8 we reach the critically important deep structures analysis. The book concludes with the story of the maritime campaigns of 1944 and 1945 and at the very end an audit of all this.

Readers who have digested many a naval history book will recall that these books are often laden with black and white photos of ships at sea, or admirals, or kamikaze attacks, but the decision to use watercolor paintings by the marine artist Ian Marshall is brilliant. The paintings curiously speak louder than any photograph and provide a colorful and vivid supporting role to the narrative.

There are many great books on naval warfare in World War II. Books about admirals, books about battles, books about sailors, books about warships. Books by Gordan Prange on Pearl Harbor and Midway, by Ian Toll, Ronald H. Spector, Edwin P. Hoyt, John Keegan, and many others including the unsurpassed 15-volume history by Samuel Elliot Morrison, History of United States Naval Operations in World War II. However, for a one-volume history, Kennedy’s book is unsurpassed for depth, breadth, insight, and narrative.