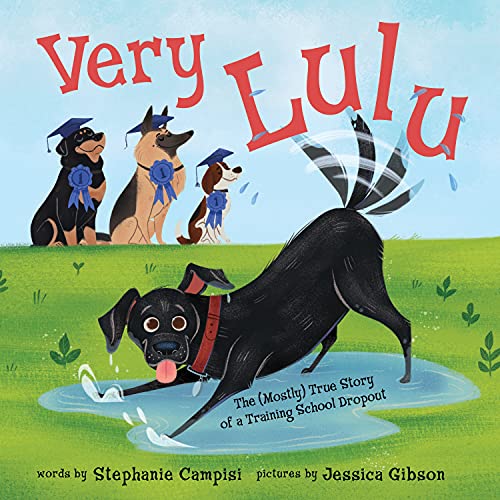 Lulu is a black Labrador who was recruited into a CIA dog-training program. She had a nose for everything. That’s how she ended up at the police dog academy. The other dogs could count, speak on command, and tell left from right.  “The other dogs were not very Lulu at all.”

When the police dog trainer asks, “Do you really think Lulu has what it takes? She’s very . . .” The repeating refrain by her handler is, “She’s very Lulu.”

“The other dogs ran obstacle courses. But Lulu was an obstacle.”

“The other dogs fetched evidence. Lulu had to be fetched.”

The bright art shows how Lulu fails at every task the other dogs in training succeed at. Lulu gets extra help with treats, toys, and even a doggy therapist. “But Lulu was still very Lulu.”

Lulu becomes sad and doesn’t want to be a police dog anymore.  he dog training officer asks again, “Do you really think this is the job for Lulu?”

Lulu’s handler knows that Lulu is unhappy. She also knows a job that she’s perfect for.  The art shows Lulu riding home in a purple car.

“Being part of my family.”

Lulu ends up going home to live with her handler.

The end papers are orange with lots of black dog prints on them as Lulu chases a butterfly. The art is bright in primary and secondary colors and was rendered in Photoshop. Most of the art is single page drawings with only six double-page spreads throughout the book.

The story is simple and fun. The co-starring dogs are a Rottweiler, a German shepherd and a Beagle. The handler has black skin, and the police-dog trainer has white skin.  The doggie therapist could be Hispanic, so there’s diversity in the cast of characters.

All in all, the book is a winner. Lulu is a charming protagonist, and the happy ending will have readers (and those read to) smiling. The fact that it’s a (mostly) true story is just icing on the cake.