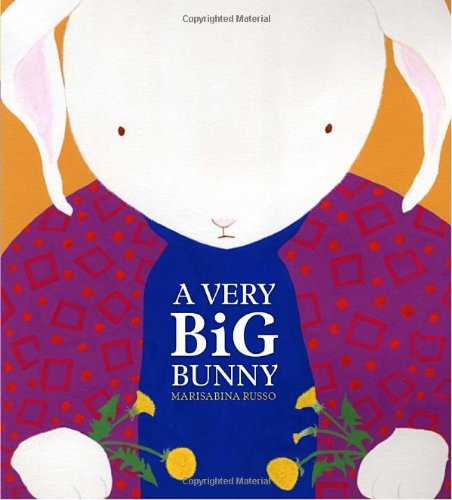 Bunny books have the reputation for being sweet and innocent. However, A Very Big Bunny, by Marisabina Russo, examines the social cruelty of a first-grade classroom.

Amelia is a very big bunny. By far, she’s the largest in her class. At recess, the three popular bunnies exclude her from the games. She’s too big for jump rope and the seesaw, and her feet are way too big for hopscotch. So Amelia spends recess by herself at the fence.

One day, Mrs. Radish (the principal) brings a new girl to class. Susannah is a very small bunny. Like Amelia, she’s banished from the recess games. She’s too tiny for jump rope and the seesaw, and her feet are too small for hopscotch.

At this point, the story does not proceed predictably. The two do not bond in their sorrow and become fast friends. Instead, Amelia shuns the tiny Susannah. Sometimes, she’s downright mean. But Amelia’s armor breaks down when the persistent Susannah invites her to be part of her top-secret plan for Picture Day.

I won’t reveal the plan. But I will say that it has something to do with tiaras. . . .

A Very Big Bunny isn’t just a great story about a developing friendship. It’s also the story of survival in a classroom setting. Some people may say that the social ladder doesn’t exist as early as first grade. However, kids will tell you that it starts sooner.

For whatever reason, certain people (or in this case, certain bunnies) have the power to set the standards for who is “in” and who is “out.” That is exactly why Amelia and Susannah’s plan is so daring. Armed with tiaras and originality, the two of them have chosen to challenge these pre-set standards.

Author-illustrator Marisabina Russo captures the showdown in just one scene. Lavinia (the top bunny) says that tiaras are not allowed for the class picture. But with a nod from the teacher, Amelia and Susannah proceed.

Russo doesn’t show the fallout. In fact, some readers might be frustrated by this omission. Yet I really don’t think it matters. Russo has chosen to focus on what is truly important: Amelia has discovered the proactive power of friendship.

Although the story is serious and packed with emotional truth, A Very Big Bunny also has fun language, rhythmic patterns, and remarkable art. The first grade teacher is Miss Arugula. The classroom decorations include “Vegetable of the Day.” And although all the students and teachers are rabbits, their posture and expressions are uncannily human.

A Very Big Bunny is an outstanding book for preschool and early elementary students. However, it will give heart and courage to readers of all ages.