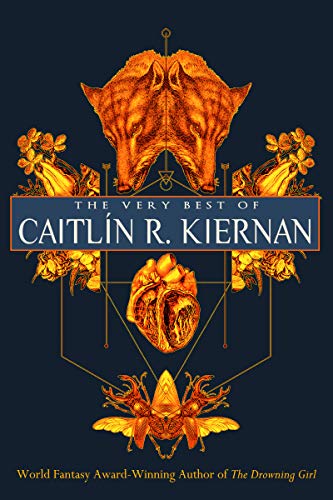 “New terrors are what Kiernan offers, for worse, but for transformative worse.”

The looming question around Caitlín R. Kiernan’s fiction is, What is this? What manner of thing has arrived, crawling, in these pages? In his introduction to The Very Best of Caitlín R. Kiernan, Richard Kadrey assures us that “Kiernan isn’t a horror writer, though she’s often referred to that way. . . . If you need to label her, ‘dark fantasy’ is a better description. A ‘weird tale’ writer is another.” These appellations aren’t incorrect, but they reveal more about the state of genre than the nature of this woman’s work.

Kiernan’s work crawls into print in the magazine-and-anthology country of science fiction/fantasy/horror, so its generic nationality largely sits questioned. Kiernan wears the mantle of a genre writer well. She publishes prolifically: 30 books in 20 years. Her works cheerfully put on hats: science fiction, fantasy, horror. And so she passes as an entity known since the early 20th century, paid and dismissed and shelved with the paperbacks.

None of which is to say that genre writing doesn’t have value. Its expansion into the literary is well-established. The trouble actually begins at the borders of genres, where the “magical” crosses into a new, less conventionally feminine land. The monsters here sidestep fairy tales in favor of heroin dreams.

Kiernan’s writing might earlier have been recognized as itself had she appeared gaunt-faced in a fedora. In the pulp-published world, she walks in the tentacle-filled tracks of Burroughs (William Seward, not Edgar Rice).

Il hombre invisible echoes in “A Season of Broken Dolls.” Its thick, unparagraphed text and rushing language are as hallucinatory as its imagery. The lesbian journalist protagonist staggers through a near-future art scene of “avante-garde abomination of stitch & snip.” Living flesh walls proliferate and human bodies are consensually sewn into new and nightmarish forms: “Do you dream in installations, muscles and tendons, gallery walls of sweating pig flesh, living bone exposed for all to see, vivisection as not-quite still life, portrait of the artist as a young atrocity?”

Kiernan’s strength as a writer is relocation. Her fiction takes the potential of racist and misogynist traditions of writing (manifesting here through H. P. Lovecraft as much as William S. Burroughs) and refilters them through lesbian experience. Queer female characters without claim to the cultural center or its safe power stagger far deeper into the sick darkness than the drunken, drugged-out men who came before them.

In “Bradbury Weather,” Kiernan evokes a life on Mars entirely without men. Far from the feminist utopias of ’70s writers like Joanna Russ, this is a world driven by destructive capital and an authoritarian state. Men are absent only because their bodies cannot withstand the environment. Mars, planet of masculinity, careens on without men, thick with exploitation and suffering. Sex workers have surgically added penises, and intimate violence shatters romances.

Look to the shelves on either side of this book and see Naked Lunch, Queer, Junkie. Scan the shelves for The Soft Machine and Cities of the Red Night.

Look back. Kiernan’s writing is gnawing on those volumes and spitting their toxic misogyny to the floor. Go back to the page at hand.

Within this darkness, a new infection emerges. An alien thing, it occupies bodies and shifts them into new, horrifying modes: “this incomplete, demonic biology. [The infected] were each no more than appendages now, human beings become coalesced obligate parasites or symbiotes, their glinting, chitinous bodies all but lost in a labyrinth of mucosal membranes, buried by the array of connective tissues and tubes that sprouted from them like cancerous umbilical cords.” The layers of sex and motherhood linked to the disease only expand the nightmare. Most crucially, this state is something the women seek out. They ask for the infection; they transform themselves.

These magnificent nightmares rise out of Kiernan’s work and infect the brain of the reader. If her work is infectious, so far only the restrictions of genre publishing have prevented an epidemic. Yet, like the Fenrir virus of “Bradbury Weather,” that infection is something we can choose; it might even be desirable. The alienness is seductive. In a terrible world (the world is terrible; that chandelier used to be a medical student: she chose this, too), we inevitably desire terrible things. New terrors are what Kiernan offers, for worse, but for transformative worse.