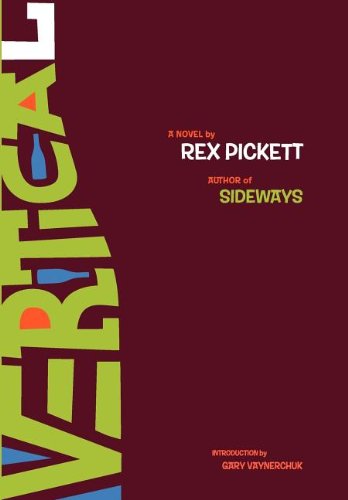 One begins reading Rex Pickett’s Vertical wondering whether, as often happens in a sequel to a book made into a movie, Miles Raymond will seem more like Paul Giamatti than the original character in the book Sideways. One does not get too far into the book, however, before the mind’s eye sees not Paul Giamatti, but . . . Rex Pickett!

Whether Vertical does for Oregon Pinot Noir what Sideways did for Santa Barbara Pinot Noir remains to be seen, but it is an entertaining and touching book.

It is seven years after the events told in Sideways. A few years after those events, Miles, his first novel being rejected, writes a novel titled Shameless, which evidently very faithfully recounts the events chronicled in Sideways but with the names changed (Miles is Martin, Jack is Jake, etc.). A year before the events in Vertical, the movie Shameless, which was as faithful to the book Shameless as the movie Sideways was to the book Sideways, comes out, and is a huge hit. Life changes radically for Rex, er, Miles.

After the movie Shameless/Sideways, he is famous, sought after. Vertical opens with Miles giving a speech at a gathering of Pinot Noir lovers at Shell Beach, which concludes with the raucous crowd egging on Miles to guzzle from the spit bucket. Later, two young sommeliers have wild simultaneous sex with him.

His publicist has gotten him a gig as the emcee at the International Pinot Noir Celebration, in Oregon, where he will be celebrated as the person who raised the profile for Pinot Noir. Everywhere he goes, he (or someone in his party) lets slip that he wrote Shameless, and he is immediately besieged by fans, many of the female persuasion who want to sleep with him. He is given gallons of free wine (mostly Pinot Noir).

Miles/Rex is changed by the celebrity. He is no longer the morose, insecure guy that we came to know in Sideways, but is more self-assured, more in control, and significantly more successful with women than is Jack (who is still no slouch himself). He is, however, acutely aware that his fame will be fleeting, and is determined to take it while he can.

Rex routinely violates this rule in ways that make Vertical far more autobiographical than simply a sequel to Sideways. For example, in the book Sideways, Miles comes to Santa Barbara County (where most of the action takes place) clearly already knowing a good bit about wine, and having drunk a lot of it. Yet, in Vertical, Miles early on reveals that when he wrote Shameless: “The truth is, I didn’t know shit about wine. Experientially. I made it all up, relying heavily on Jancis Robinson’s brilliant encyclopedia on the subject, The Oxford Companion to Wine.” There are several other instances in the book in which Miles is evidently talking more about Rex than about the “real” Miles of Sideways.

As in Sideways, Vertical has a major wine component. The characters travel to Santa Barbara County, visiting a number of the same locations as in Sideways, before heading up to Paso Robles, Napa, and Sonoma, and then to the Willamette Valley of Oregon. Naturally, the wine aficionados who read the book will scour it for errors, but the copy editors seem to have done a good job.

Some real people, such as Frank Ostini, the owner of the Hitching Post in Buellton, and Bruce and Susan Bandstra, the owners of the Brookside Inn in the Willamette Valley, appear and have speaking roles, so the book cannot have the standard disclaimer that resemblances to any person living or dead is a coincidence.

As in Sideways, wine is not really the plot of Vertical. This time, Miles’ mother, Phyllis, who had a stroke a few years before and is in an assisted-living facility in San Diego, wants to get out of there and live with her sister in Wisconsin. Miles decides to drive her there, heading first up to the International Pinot Noir Celebration and then driving straight across to Wisconsin, in a wheelchair-accessible van. (Since the Dedication in Vertical indicates that Rex’s mother died in 2000, this part is not strictly autobiographical, although Rex really did have to care for his mother, who really did have a stroke, in San Diego, and many of the background details are based on actual circumstances.)

Miles enlists Jack, who is now divorced and not nearly as well off as he was in Sideways, and Phyllis’ Filipino caretaker, Joy, to help, paying them both significant sums. And off they go.

Rex shows that his gift for creating wildly funny scenes is quite intact. There are quite a few of them during their road trip, some of which will be hard to include in a movie that is not triple-X rated. (Any fans of the movie who were concerned about the language in the film should be forewarned that the language is even cruder—in other words, they talk like a couple of real guys.) The book is laugh-out-loud funny.

The Oregon Pinot Noirs that Miles waxes rhapsodic over in Vertical tend to be small lot production wines from rather small wineries. It would be difficult in increase production of those wines in response to a successful Vertical movie. But that does not really matter. In the course of the trip, the characters of Miles and his mother are well drawn. We come to like Miles more than we ever did in Sideways, and nod knowingly about what he goes through. And by the end, the mind’s eye once again sees . . . Paul Giamatti.