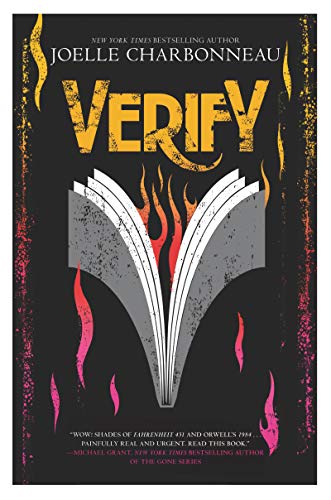 Not a week goes by when President Trump doesn’t lash out at “fake news,” railing at the media as “the enemy of the people.” Phrases like “climate change” are expunged from government documents. Would-be readers are abandoning books for electronic devices, newspapers for online perusing, bookstores for cyber cafes.

In this dystopian present that we live in, Joelle Charbonneau’s Verify fast forwards us 70 years into the future into a bookless America. Her heroine, 16-year-old Meri, is suddenly handed contraband by a mysterious stranger.

“Why would someone give me a piece of paper?” Meri asks herself. “Why would they give anyone paper? Especially now when the city had joined the national effort to buy back any paper that had not been recycled. Technically, I should go to one of the centers and turn the paper in. It’s what anyone who loves our city and country would do.”

But of course Meri decides not to do that. Instead she brings the paper home. “The paper is wrinkled and torn, but the one word written in the center of the page in red block letters that are faded by the rain and partially washed away still is readable. VERIFY.”

Verify—a word Meri has never heard before. Searching her school’s computer for its meaning, she sets off alarms notifying the police. The government considers verify a code word for a “gang of known criminals to help them identify each other . . . recruiting new members who don’t understand what they are getting themselves into.”

Clearly Meri doesn’t understand what she’s getting herself into. Nor does she understand what those mysterious paintings are that her mother made just before she died in a tragic accident. Or why an equally mysterious boy named Atlas, whose father has disappeared, suddenly leads her to a secret room full of books.

Verify was “one of the first words banned from use by certain government agencies back when they started ‘cleaning up’ the streets and making the country ‘safer,’” Atlas tells Meri. “Little by little, they removed crime and poverty, but they also removed words. Ones that would encourage people to question what they were told. And by doing so, they changed this from a country that believed in facts to one built on lies.”

With more than a wink and a nod to Fahrenheit 451 and 1984, a bookless world is a great premise for a book. We all know that banning books is bad, that controlling information is the first step toward fascism, but those are about the only crumbs Verify offers us. For the premise of Big Brother to work, you need to feel something viscerally terrifying about Big Brother.

In Verify, it’s not made clear why the government has outlawed books, what their ideology or motives are, or what they’re telling people. Interestingly enough, Meri’s Chicago is not a post-apocalyptic wasteland. In fact, most folks (other than the Stewards—the tenders of the banned books) seem to be very happy and content. That could make for a really creepy premise, but unfortunately Charbonneau goes nowhere with it.

In a dystopian future, the devil is always in the details but, given the broad strokes painted in this simplistic book, there’s not much of a devil to be found. Verify, for all of its wonderful premise, is a grave disappointment. It’s superficial, unimaginative, deeply flawed and unfulfilling, and in no way delivers the oomph that should knock the wind out of us when presented with a bookless world. And come on, there have been no changes in technology in 70 years?

On the positive side, there’s a lot of action in Verify. The book is a page turner, albeit an ultimately disappointing one, and it’s always good to a have a strong female role model leading the fight for truth and justice. Will Meri join this underground movement to get words back to the people? Will she discover the mystery of her mother’s death?

The prescient 1984, with its ominous and omnipotent Big Brother, showed us the grim horror of totalitarianism. Verify shows us the horror of . . . what again? Perhaps it’s best simply to re-read 1984. Just make sure it’s in book form. Leave the tablet at home.