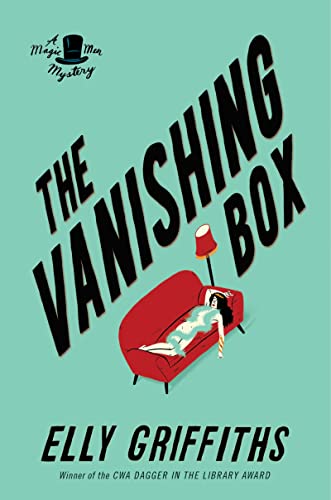 The Vanishing Box is the fourth in the Magic Men Mystery series from British author Elly Griffiths, and it’s set in 1953, when the deep echoes and wounds of the war still shiver in England. But it’s also a time when the future is coming brilliantly to life, as the landlady where the variety stage player lodge appreciates her wireless (radio) but the stage players themselves are eager for the huge audiences that television promises to give them. Max Mephisto’s daughter Ruby, also a magician, is ready to play to that enormous crowd. Max, maybe not so much.

The vanishing box is, of course, a famous trick of stage magic. Max and Ruby create a father-daughter performance where one after the other disappears, only to return to applause. Behind the scenes, each struggles with romance (an enduring thread in Griffiths’s mysteries): Ruby, in love and engaged to DI Stephens (but always second in line behind his investigations); Max, feeling over the hill (was 44 so old, back then?), and suddenly open to a new and younger lover. How cruel that murder could threaten these possible happy diversions!

At first, it seems the murderer might just have madly posed one beautiful young woman to resemble something from the local stage show, a historic scene from a painting. But when the murder rate escalates, even the police investigators suffer trauma:

“‘Holy Mary Mother of God.’ This was the porter becoming religious with shock.

‘Have you got a telephone?’ [Emma] asked the porter. . . . She was very grateful to Bob for offering to stay with the effigy that had been [a man] but didn’t quite know how to say so. She followed the porter, whose name she learnt was Norman, to his basement apartment. There she rang the DI and refused Norman’s offer of a whisky ‘for the shock.’”

Despite the foregrounding of Max and Ruby, the magicians at center stage of the murder scenes, it’s the police investigators that Griffiths places into best perspective. Murder still horrifies them; death wounds them; investigating a killing, whether it’s purely evil or somehow a necessary twist to a broken mind nearby, shatters their everyday interactions and relationships. How many losses will the Brighton murderer create, as he or she continues to stage death with theatrical trappings and terrible effectiveness?

Griffiths is one of the few suspense authors who can successfully summon the reality of the awkward 1950s, with its uncertainty, its breathtaking possibilities, and its rapid changes that build up a heap of dead customs, vanished family structures, safety wiped away. Staging The Vanishing Box in the last of the old-time variety shows adds to the sense of regarding a vanished era, along with lives lost.

The plot is neatly pinned together, and if the red herrings are not as noticeable as the kisses and courting, well, that’s how Griffiths spins this series. (Her other one features forensic archaeologist Ruth Galloway. And Griffiths has been a winner of the prestigious CWA Dagger in the Library Award.) Pick this one up as a good traditional mystery that won’t keep you up at night, but will keep you pleasantly engaged, page to page, like the ones from G. M. Malliet, Ellery Adams, or Barb Ross.

Once everything’s sorted out at the end of The Vanishing Box, quite a few things have vanished, but not returned. Will the series continue? It’s not clear what will come next, but DI Edgar Stephens has new possibilities in front of him—and so does Max Mephisto.