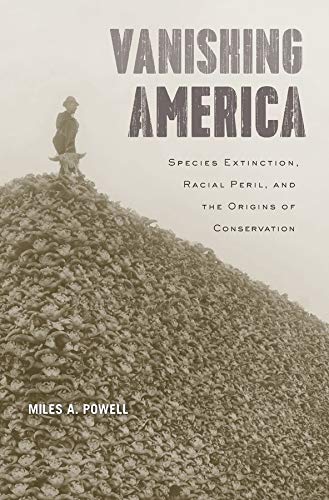 Environmental historian Miles Powell has provided a new and provocative angle to the history of the American conservation/preservation movement through the lens of its racial logics.

The broad sweep of his argument is that old-stock White America (e.g., Nordic) in the 19th century saw itself as a superior human variant whose destiny was to dominate its landscape and all within it toward its own progressive ends. Industrial capitalist enlightenment ideology about human superiority and its entitlement to exploit resources in support of growth, development, progress, and infinite capitalist expansion undergirds and animates much of Powell’s compelling analysis.

Powell begins by reminding us of the power of Darwinian thought—extinction through natural selection competition results in better-adapted survivors. This idea is central to the politicized scientific racism of the 19th and early 20th centuries that saw extinction of American Indians and free black people as an inevitable outcome of direct competition with Euro-Americans. Throw into this mix the equally inevitable loss of other species who get in the way of progress. This framing, of course, absolve the perpetrator and blames the victim.

This dominant view did not come without challenge. A number of prominent intellectuals contended that there was room for everyone and everything. Anthropologists lent a particularly strong voice to the argument that American Indians could certainly adapt to the new capitalist order if they were allowed to do so through adaptations including commercial farming.

The American Civil War, with all its unbridled destruction and species loss, further resulted in myriad new technologies for industrial/territorial expansion. The Western frontier was rapidly being colonized and its resources extracted. So as the 19th century churns toward its end, there is an imperialist nostalgia (i.e., mourning for that which is lost or perhaps never existed in the first place) that begins to envelope White America. Wilderness, wildlife, and Indians are no longer seen as an impediment to the expansion of civilization. Rather they are emblematic of a foundational chapter to the American saga—and they become rather thoroughly romanced in the dominant culture’s psyche.

By the late 1800s there was also growing concern in white America that urbanization had created degenerative dynamics that undermined its genetic vigor and resilience. Though Powell does not mention it, such concerns were powerfully theorized by sociologist Emile Durkheim (1858–1917) who argued that urban social change and industrial divisions of labor led to anomie (social and cultural disintegration as the collective conscience erodes and no longer puts a check on non-normative behavior). Weakened social ties lead to all manner of social dysfunction, including escalating suicide rates.

Not surprisingly, new interest in sports hunting and the outdoors were seen as prescriptions for renewed vigor among White Americans. In the midst of urban American anomie, a curious cultural syndrome emerged known as neurasthenia— “paralysis of will” with a suite of symptoms including fatigue, irritability, anxiety, depression, heart conditions, and neuralgia.

All the piece coalesced that undergird the American conservation and preservation movement. Among other remedies, we see the first National Park dedicated in 1872 (Yellowstone) with very famous advocates (Teddy Roosevelt). TR clearly saw the preservation of wilderness as key to reinvigorating White America, which he put into personal practice through his noteworthy sports hunting feats. Powell notes that TR and others luminaries (e.g., Aldo Leopold) championed the notion old-stock American racial superiority. The notion of White racial superiority, American exceptionalism, and the threat of degeneration and contamination (cultural and biological) that is still very alive today in Western America where there is an active discourse on and practices in support of preserving Western culture, lifestyle, heritage, family values, and freedom.

National Parks and their many variants become a critical mechanism to preserve wilderness. They can be construed as a kind of simulacrum of nature complete with managed wildlife and a curated experience for visitors. A 1907 Department of Interior notice of the “Rules and Regulations of the Yellowstone National Park,” has the following stipulations:

A particular notion of wilderness is being underscored in those rules: Parks preserve wilderness, and that wilderness is devoid of humans and their use of its natural resources. That is to say that American Indians who had historically and prehistorically used those lands toward their own survival ends were removed or barred from America’s National Parks.

This construction is further codified in the 1964 Wilderness Act: “The wilderness, in contrast with those areas where man and his own works dominate the landscape, is hereby recognized as an area where the earth and its community of life are untrammeled by man, where man himself is a visitor who does not remain.”

Powell might have tied his excellent analysis up with a meditation on the cultural construction of wilderness along the lines of environmental historian William Cronon. Cronon exasperates many in the American conservation movement with his exhortation that wilderness must be conceived with humans as part of the mix; to do otherwise is unnatural.

Instead, Powell explores the notion of de-extinction (the recovery of lost species through modern scientific methods) and all the ethical and moral quandaries therein (think here of the movie, Jurassic Park). Though Powell does not delve into the science, this reality is much closer than most of us might think. Through CRISPR (clustered regular interspaced short palindromic repeats) genetic technology, we may well see far more than gene editing with the actual full re-creation of ancient organisms. In the 21st century, they will all be invasive species.