Vampyres: Genesis and Resurrection: from Count Dracula to Vampirella 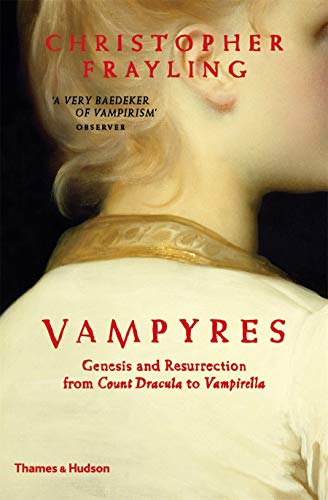 Vampyres is a remarkably in-depth and academically dense account of the entire history of the suave upper-class vampiric count that Dracula represents.

The book is half academic discourse and half anthology; Frayling tells the historical tale, then shows the literary proof as it goes through folklore-based allegories and pulp stories, and into more literary genres.

He talks at length about the vacation during whch Mary Shelley invented Frankenstein and her friend Dr. Polidori invented modern literary vampires by stealing an idea from Lord Byron, then follows the explosion of vampire literature through the 1800s from there.

Likely the most interesting part of the book is the discussion of how the Easter European “vampire plagues” in which local peasants were battling what they saw as actual vampires, fed into the growing literary fad for more and more sensationally sexy and bloody vampire stories in the cities of Western Europe.

Brief forays into discussions of classism, social history, secularism, and the early days of science and how it came up against centuries of superstition and folklore—all combine to paint a picture of a point in history ripe for a new sort of monster that hides among society and warps the morals of those he encounters.

It's a long story Frayling tells, from nearly untraceable folkloric roots through a looping series of fads, and it's hard to follow a straight line, so Frayling doesn't try. He follows the loops as they happen instead, and makes a point of discussing and analyzing where they come together and change the genre. Most notably, in Dracula. Stoker's best known work managed to fuse the Gothic and the pulp into one book that defined the view of vampires all the way through to Anne Rice, and even to parts of Buffy the Vampire Slayer. The book talks about where the ideas came from that gave Stoker his book's name-character, even those the writer himself may not have consciously realized. It talks about the history of similar novels before and after, sketching a literary landscape that Dracula changed and defined. And it even includes some of the notes that went into the background preparations for the book itself, notes that have extensive notes of their own, since this is, at it's heart, an academic book.

For being so packed with information and dense with literary theory, historical fact, detail, complicated charts, and timelines, Vampyres is a remarkably readable book, though it does sometimes get wordy as any textbook.

The book also includes several collections of pictures: book covers, posters for movies and stage shows, engravings from penny dreadfuls, the paintings and photographs from the period that drew on the same imagery as the stories, and portraits of the people involved in the convoluted path the vampire has taken through time. This extra touch helps to break up the wordiness, and fully illustrates the theory and detail given between them.

Frayling doesn't shy from the inherent sexuality of the subject matter, but also doesn't revel in it—though the source material sometimes does. He even-handedly represents the several forms of vampire stories he identifies as creating the modern idea of the vampire, and traces their connections through the lives and works of the people who shaped them, copied them, or innovated them. He takes particular interest in stories that are less often collected in anthologies, as these are the ones that show the stages of evolution between the big name stories taught in schools.

Vampyres is a dedicated and exhaustive study of the literary history of the vampire, and a boon to anyone with an interest in understanding where vampires come from and where they’re going.