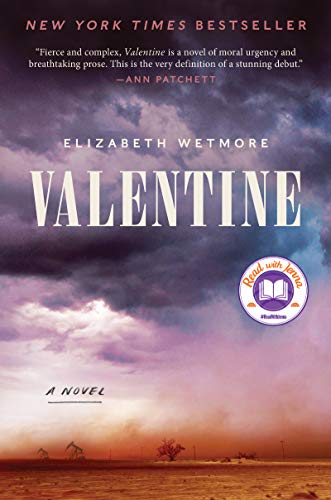 “Valentine is a remarkable story, brilliantly told, of tragedy in a white-male-dominated society in which Glory Ramirez is deemed by many to be less deserving of justice due solely to her gender and ethnicity, and a ragtag group of women who forge alliances in the aftermath of the crime, futilely driven to obtain justice for Glory.”

From the dry, dusty desert of west Texas comes Valentine, a tale of lives nearly as bleak as the landscape, drawn together by the brutal rape of a young Mexican girl. With a voice uniquely her own, author Elizabeth Wetmore weaves together the threads of each desperate life into a compelling tragedy that cries out, unheard, for justice.

Forget hooking your reader in the first 10 pages; Valentine hooks by the second sentence: “His cowboy hat is pulled down far enough that the girl sitting outside on the dusty ground can see only his pale jaw, freckled and nearly hairless, a face that will never need a daily shave, no matter how old he gets, but she is hoping he dies young.”

With that, Wetmore introduces the reader to Gloria Ramirez—but “[f]rom now on, she will call herself Glory”—and her brutal rapist, oil field roughneck Dale Strickland. The crime will soon bind together a group of lonely souls in 1970s Odessa, Texas, as they gear up for what they hope will be the Permian Basin’s next oil boom.

Besides Glory, there’s Mary Rose, young mother of Aimee Jo, who discovered the bruised and bloodied rape victim on her front porch, a quirk of fate that pegged her as a prime witness for the prosecution. There’s Corrine, a retired schoolteacher recently widowed, still coping with the loss of her beloved Potter.

And there’s Debra Ann, the young girl who lives across the street from Corinne, whose mother, Ginny, suddenly took off one day—“left town, left a note and most of her clothes, left Debra Ann and her daddy.” But Debra Ann is convinced her mom will be back some day, so she keeps the house straight while she worries about her dad—“who doesn’t sleep enough”—because when her mom does come home, “Debra Ann doesn’t want the house to be such a mess that her mom turns around and walks right back out the door again. . . .”

There are other characters, of course, like Karla the waitress and Jesse, the soldier home from the war who lives in a drainpipe, who fill out a vivid picture of life in an oil town. But it is this core group around whom the story revolves and captures the hearts of readers.

Valentine is a remarkable story, brilliantly told, of tragedy in a white-male-dominated society in which Glory Ramirez is deemed by many to be less deserving of justice due solely to her gender and ethnicity, and a ragtag group of women who forge alliances in the aftermath of the crime, futilely driven to obtain justice for Glory.

Wetmore is a native of west Texas, and it shows in a narrative that utilizes place and time as characters as surely as if she had named them. She transports the reader to the middle of west Texas’s Permian Basin. There, a smell of desperation mixes with the taste of bitterness of past oil booms gone bust, mixed with sweet anticipation of another gusher just over the horizon. If only they can survive to get there.

The pace is laconic, as befits a story that is more about people than events, although there is one tragic event that binds them together. But though the pace is deliberate, the prose almost makes the reader wish he could linger with these characters—and get to know some of the lesser characters, mentioned only in passing, a little better.

For instance, there’s the absent Ginny’s grandmother, who “was a toothy old woman, a believer in hellfire and hard work and punishment that fit the crime. If the devil comes knocking on your front door in the middle of the night, she liked to say, chances are you flirted with him at the dance.” This reviewer would like to ask her if she thought that applied to Glory Ramirez.

Few novels cut to the conscience the way Valentine does, in a time and place where justice isn’t blind, but should be, and where injustice wears cowboy boots and jeans and has white skin. It’s a difficult story, as tragic as it is inevitable.