The Vagina Bible: The Vulva and the Vagina: Separating the Myth from the Medicine 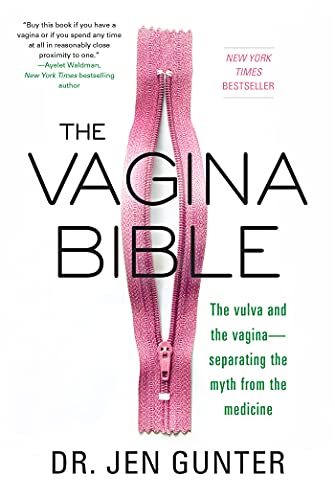 “The Vagina Bible is a reference that helps women and girls understand that the female body is complicated and fascinating and nothing to be ashamed of. For once woman have an authoritative voice coming from someone who looks just like them.”

The controversy surrounding Dr. Gunter’s book started before it was published. When her publisher, Kensington Publishing Group, tried to advertise on Twitter, their efforts ran afoul of the platform’s policies. Twitter informed Kensington it was prohibited from using the word “vagina” to promote the book. There was no prohibition against posting a photo of the book’s cover, which included the word “vagina,” but they couldn’t use the word in the post’s text.

For that reason alone, everyone should get a copy of this book.

Dr. Gunter responded to Twitter’s odd position with her own tweet, “Our societal inability to say vagina like we say elbow is one reason I insisted on VAGINA in the title. When we’re not allowed to say a word the implication is it’s dirty or shameful. Not being able to buy an ad because of the word vagina for a book about vaginas is ridiculous.” Please note, Twitter had no problem with Gunter using the “v” word four times in her post.

Twitter’s position on this matter is a primary example of why Dr. Gunter’s book is needed. Gunter has, as she puts it, a “vagenda.” And that is, “for every woman to be empowered with accurate information about the vagina and the vulva.”

Too often women’s health issues and concerns are relegated to the dust bin of medical research, overlooked or ignored by (usually male) doctors and often treated as insignificant or nonexistent by the medical profession in general.

Gunter’s book changes the focus and places it squarely on a woman’s right to know how her body works and why it works the way it does. She writes in a conversational tone that makes the reader want to continue reading. And, she’s funny—not something normally encountered in a nonfiction book about women’s health issues.

There is no requirement to read the book cover to cover. The chapters are clearly laid out so anyone with a vagina, or anyone who spends time in close proximity to one, can dial into the topic of interest. Readers will discover, however, that reading one chapter will undoubtedly lead to turning the page and starting the next one.

After all, how can one avoid reading when the book opens with, “The vulva is the ultimate multitasker . . . it is built to handle the irritation of urine and feces . . . deliver a baby . . . and multiple orgasms. . . . The penis and scrotum have nothing on the vulva.” You go, girl!

This is one of those books where there are frequent “I didn’t know that” moments. For example, “the vulva is the outside (where your clothes touch your skin) and the vagina is the inside. The transition zone between . . . is called the vestibule.” Perhaps it’s what is mean by having a “religious experience.”

Women, of all ages, are not educated about their bodies. And, Gunter states that “[N]o woman was ever benefited by learning less about her body.”

Sex education in the schools is too often limited to telling girls, “Don’t have sex.” Rarely is there any intelligent, educated instruction about a girl’s body. So girls grow up and remain uneducated and ignorant of their bodies and its function. Factoid: Women’s bodies are different from men’s.

Dr. Gunter’s book is an attempt to remedy matters by giving women an easy to read guide. As with most well-written tutorials, Gunter starts with the basics. Gunter covers the vulva, and the vagina (how many thought that was the same thing)? before moving on to the “Vaginas and Vulvas in Transition.” Then it’s on to “Female Pleasure and Sex Ed” before ending with “Pregnancy and Childbirth.”

Oh, and that’s just the first 50 pages, “Getting Started.”

Just looking at the table of contents makes one wonder why no one ever bothered to mention how complicated “down there” could be and why it’s necessary to know about practicalities and maintenance. Gunter addresses medications, mythology, STDs, conditions, and symptoms, and puts it all together at the end.

There is much to learn from the pages of Gunter’s book. The woman has 30 years of experience as an obstetrician-gynecologist and even more as someone living with a vagina. In case you’re wondering, Gunter states that yeast is a normal part of the vaginal microbiome and 23% of women will develop a yeast infection after using antibiotics. Another reason to be cautious when taking them. Especially since, as Gunter states, a urinary tract infection (common among women) is one of “the most common reasons women are prescribed an antibiotic.” She suggests waiting for the culture results before taking an antibiotic, especially if the symptoms “are not classic or there is concern about a hard-to-treat bacteria.”

Many women have heard varying opinions on what type of underwear is best. Gunter states categorically, “underwear can’t change vaginal pH; that is an inside job.” She does suggest avoiding underwear made of latex or plastic because “anything that causes you to sweat could be an issue.” Some women will be happy to know, “thongs . . . appear to have no negative impact.”

In fact, one of the best segments is Chapter 47, “Journal of Old Wives’ Tales.” This one includes stories, admonitions, suggestions, and remedies many women have heard about or tried.

It’s important to remember that Jen Gunter is a doctor of medicine; she went to medical school, graduated, and everything. So, her opinion counts. And Gunter is controversial. She doesn’t stand on ceremony and has no reluctance to take on those who try to patent “patriarchy and snake oil.” She directly challenges celebrities who market a variety of products and procedures to women by promising to make them more . . . whatever. Gunter points out that these marketing opportunities perpetuate the idea that women are inferior in so many ways and that what is normal is treated as abnormal and something to be overcome.

Gunter is also not shy about challenging the “rules” that men impose. “If a male partner says lube affects his sexual performance he, not you, should see a doctor.” So there!

The upshot of all this is that Dr. Jen Gunter has provided women with a book that will educate and entertain. The Vagina Bible is a reference that helps women and girls understand that the female body is complicated and fascinating and nothing to be ashamed of. For once woman have an authoritative voice coming from someone who looks just like them.