This Vacant Paradise: A Novel 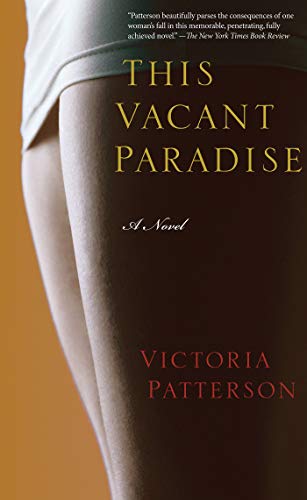 In her first novel, Victoria Patterson returns to Newport Beach, California, the setting of her linked story collection, Drift. Esther Wilson is poised on the fault line between privilege and economic distress. Her beauty and the demands of super matriarch Grandma Eileen require a suitable husband—if only she can find one who appeals to her at least a little. The trouble is that at the age of 33, time is running out, not to mention that her current suitor fills her with boredom and incipient nausea.

Esther is such an old fashioned name. Newport Beach is truly an enclave of political conservatism and vapid imitative wealthy culture. Grandma Eileen suffers from gout, an addiction to Heinekens, and a deep discontent with her offspring. In fact, Esther’s father was kicked out of the family home when his sexual preferences became known and while Esther and her brother Eric were raised by their single gay father, she ended up back at Grandma Eileen’s after his death. Eric became a homeless junkie. The entire scenario resembles the stuffy yet desperate downfall of the English aristocracy.

Victoria Patterson lived in Newport Beach during her middle school and high school years. Clearly she did not fit in and her portraits of both the rich and those on the fringe are drawn with a fierce yet humorous satire. When Esther, who must work at a women’s clothing boutique in the high end Fashion Island shopping plaza for her spending money and falls in love with Charlie Murphy, she experiences a sexual, social, and even intellectual awakening that endangers her precarious position as an inheritor of Grandma Eileen’s fortune. The novel is an intricate picture of Esther’s simultaneous economic downward spiral and the uplifting awareness of her selfhood.

If that sounds dreary or too heavy, it is. But Ms. Patterson’s writing is so good, so crystalline, and so full of dark humor, that the reader suffers with Esther while having frequent laughs over the grandmother, not to mention the “best friend” Brenda whose plastic surgery, shopping, interior decorating, and hours at beauty spas are not enough to hold on to her fabulously rich husband. Paul, the prospective suitor, tall, pale, nervous, and a terrible kisser, is cringe inducing. Charlie, as the lover, a deserter from his successful father’s family business, considers himself socially enlightened and attracts female students at the local community college where he teaches. In fact, Charlie has quite a thing for women, though he is especially smitten with Esther, and his desires are as self-involved as any Newport Beach denizen. The sex between them is hot and lusty and actually well written.

This Vacant Paradise, aptly titled, raises numerous questions concerning economics, social class, the position of women, and the role of family. Are we really as modern and conscious as we think we are? How do the attitudes of families with only recently acquired wealth determine the destinies of their descendants?

The author read and re-read the novels of Edith Wharton and Henry James while writing this novel patterned on The House of Mirth. We are fortunate as readers in the early years of the 21st century, to have new writers possessed of the skill to address the human condition with the depth of literary fiction in addition to the page tuning craft found in bestselling thrillers, mysteries and romances. Victoria Patterson revels in these skills and is an author to read now and to watch in the future.