U.S. Politics in an Age of Uncertainty: Essays on a New Reality 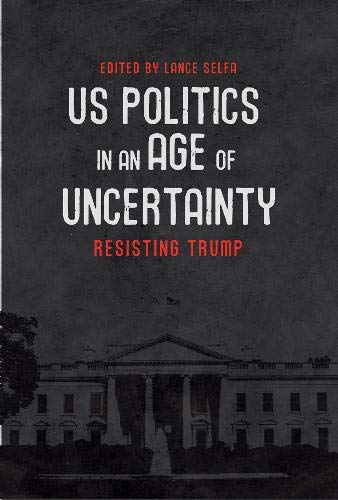 “a brilliant and indispensable intervention from the socialist left on the real historical, class, and sociopolitical forces at play beneath the national political freak show that is the new Age of Trump.”

With the news cycle endlessly taken over by the latest madness emerging from the mouth or Twitter feed of the White House, could we step back from the circus to reflect seriously on the social and historical forces that produced the Donald Trump presidency? Haymarket Press’s new collection of essays by leading left political analysts, U.S. Politics in an Age of Uncertainty: Essays on a New Reality, is required reading for anyone interested in such reflection.

All the contributors rightly place the Democrats at the center of the story of what went wrong. “The horrors and challenges presented by the Trump administration,” writes Princeton professor Keeanga-Yamahtta Taylor in the book’s seventh essay, “should not obscure the very important discussion of how the administration came into power. You cannot understand the emergence of Trump without taking account of . . . the failure of the liberal establishment to provide a real alternative to the reactionary populism . . . of Trump.”

Each contributor brings their own distinctive slant to this core thesis. In the volume’s opening and sixth essays, Sharon Smith and Lance Selfa show how the Democrats opened the door to Trump’s right-wing pseudo-populism with their dedication to neoliberal orthodoxy and their failure in officer under Obama to meet the needs of working-class Americans.

In the fifth essay, sociologist Neil Davidson sees Trump’s victory as part of a global phenomenon —the unsettling rise of right-wing nationalist populism in the vacuum left by the decline of a serious anti-capitalist Left.

According to historian Nancy Fraser in the book’s final essay, first published just more than a year ago, Hillary Clinton’s ignominious defeat marked “The End of Progressive Neoliberalism”—the defeat of “an alliance of mainstream currents of new social movements (feminism, antiracism, multiculturalism, and LGBTQ rights), on the one side, and high-end ‘symbolic’ and service-based business sectors (Wall Street, Silicon Valley, and Hollywood), on the other.” By Fraser’s account, “progressive neoliberalism” was “rejected in toto” by Trump’s deindustrialized and rural white voters.

For these “left behind” Americans (including not just “industrial workers, . . . but also managers, small businessmen, and all who relied in industry in the Rust Belt and the South, as well as rural populations devastated by unemployment and drugs”), the “the injury of deindustrialization was compounded by the insult of progressive moralism, which cast them as culturally backward. Rejecting globalization, Trump voters also repudiated the liberal cosmopolitanism associated with it.”

There are four basic problems with what Smith calls the “blame the white working-class narrative.” First, Trump only won the overall white vote by one percentage point more than did Mitt Romney in 2012—hardly what one would expect if Trump had ridden some great wave of white proletarian rage.

Second, Trump’s base was relatively affluent.

Third, the category of “white without college degree” includes droves of voters who are not proletarians. “There are millions of Americans,” Moody writes, “who don’t have a college degree, who are not working-class, and who are actually more likely to vote than the ‘left behind’ industrial workers. . . . The proportion of those without a college degree who are petty bourgeois or genuinely middle-class, who are more likely [than working- and lower-class people] to vote and to vote Republican is quite large,” Moody writes, “and the equation of the missing degree with working-class status [is] misleading.”

Fourth, most Americans without a college degree don’t vote so that “any measure of [political] patterns among those who do vote is a measure of a relatively high-income minority.” When we realize that “the many millions of people who did not vote . . . far outnumbered those who voted for either party in 2016,” it becomes clear that the biggest electoral story about the U.S. working-class in 2016 is that it sat out the contest between the two dismal pro-business candidates and parties, NOT that it made some (imaginary) wild shift to the white-nationalist right.

What really put Trump in the White House, Davis concludes, was not some novel “wave of white, working-class resentment” but instead Trump’s success in “capturing the entirety of the Romney vote, without any of the major defections (college-educated Republican women, conservative Latinos, Catholics) that the polls had predicted, and Clinton had counted upon.”

Trump achieved this, Davis thinks, with “visceral white nationalism” but also with his “genius stroke”: keeping the evangelical right on board by giving it the vice presidency (the Christian proto-fascist Mike Pence) and power over the re-composition federal judiciary.

Also key, Davis notes were the egregious failures of the Hillary Clinton campaign: “abdicating any serious effort in smaller industrial towns and cities;” “skip[ing] the entire state of Wisconsin;” and “stupefying inattention to voter unrest in long-Democratic nonmetropolitan counties.”

Besides the “blame the white working-class narrative,” another suspect take (the other side of the identity coin, so to speak) on 2016 election attributes the Democrats’ failure to their alleged excessive “identity politics” efforts to win the votes of women, Blacks, Latinos, Muslims, and LGBTQ folks.  U.S. Politics in an Age of Uncertainty rejects this storyline as well.

In her essay, “Black Politics in the Trump Era,” professor Taylor details how Obama’s presidency “was not a gift to African Americans” but instead “represented the painful continuity of racism, discrimination, and inequality that has always been at the center of Black life in America.”

When the Black Lives Matter arose to protest the longstanding problem of racist police brutality, Taylor notes, Obama served the political establishment by trying “to get the movement off the streets by seducing activists with roundtable meetings and seats on commission . . . cheap flattery and the appearance of reform.”

Hillary, Taylor observes, added nothing to the anti-racist cause. Mrs. Clinton ran a campaign that “ignored the everyday conditions experienced by ordinary people” while focusing on Trump’s horrible behavior and advancing the nauseating claim that “America is already great.”

That claim was hardly going to rally Black votes when, even after eight years of a first Black U.S. president: “Black unemployment remain[ed] twice the rate of whites . . . 38 percent of Black children continue[d] to live below the official poverty line; . . . a shocking 35 percent of Black workers—mostly Black women—make under fifteen dollars an hour.”

In the book’s eighth essay, Elizabeth Schulte combines a critique of Trump’s revolting sexism with a powerful critique of how “the ultimate insider” Clinton’s neoliberal campaign “refus[ed] to put forward demands that would actually have [a positive] impact on working-class women and, in fact, opposed those demands, including a federal fifteen-dollar minimum wage.”

The Clinton campaign’s ugly gender-shaming of Bernie Sanders’ left-leaning progressive backers as “’brocialists’ who didn’t care about sexism” obscured the fact “a growing number of people, including women, were repelled by Trump but also by the Democratic Party status quo that Hillary Clinton exemplified . . . For millions” of women as well as men, Schulte notes, Hillary’s tepid, “model establishment” candidacy “rang hollow and was a perfect example of how out of touch” the Democrats “were with working people, even those on whom the party ordinarily depends for votes.”

The volume ends with two interviews, with Deepa Kumar and Justen Akens Chaco. These conversations remind us that the Bill Clinton and Barack “Deporter-in-Chief” Obama administrations advanced and continued many of the nativist, “border security,” and Islamophobic policies and narratives that have been taken over and amplified by Trump.

Moving from the past to the present and the future, the key lesson offered by U.S. Politics in an Age of Uncertainty is that activists must come together to construct something that doesn’t actually exist in the US today: “a viable left.” The alternative is endless captivity to what Fraser calls “the Hobson’s choice between reactionary populism and progressive neoliberalism.”

Despite two key omissions—an essay on the central role that “Russiagate” has played in Democratic Party strategy and U.S. politics since Trump’s election and an essay on environmental politics—U.S. Politics in an Age of Uncertainty is a brilliant and indispensable intervention from the socialist left on the real historical, class, and sociopolitical forces at play beneath the national political freak show that is the new Age of Trump.