US Open: 50 Years of Championship Tennis 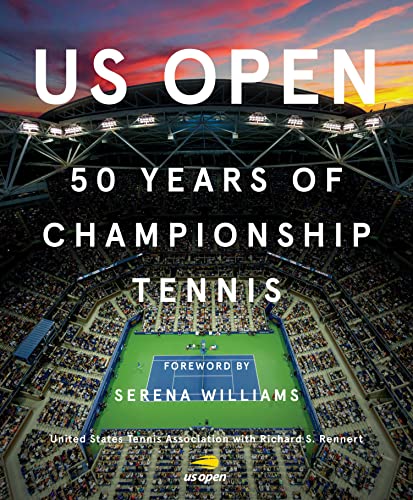 Every major sport in every country has at least one iconic venue associated with it. This stadium, field, links, rink or other dedicated athletic facility immediately evokes the history and essence of the competition and the very air seems permeated by the spirits of great athletes of yesteryear who haunt the scenes of their dreams, triumphs, and heartbreaks.

In the tennis world, the hallowed grass courts of Wimbledon celebrate decorous roots in the genteel pastime of English elites properly attired in impeccable whites and rewarded with strawberries and cream for afternoon tea.

The Australian Open is played in the massive Melbourne Park complex on a synthetic Plexicushion surface, underscoring the freedom from hidebound tradition down under, reflected in the unabashed exuberance of attendees loudly celebrating athletic prowess.

The last of the year’s four major tournaments, the US Open, has been held on hard courts at the USTA Billie Jean King National Tennis Center in Flushing Meadows, New York City, since 1968 after the National Championship was moved from the West Side Tennis Club in Forest Hills. This move coincided with the beginning of the Open era in which transformed tennis by allowing paid professionals and amateurs to compete together giving the historically elite sport a more egalitarian profile which immediately boosted audiences and popular interest overall. And in 1973, the US Open became the first Grand Slam tournament to offer equal prize money to men and women after strenuous efforts by women’s tennis legend Ms. King.

Even more than the easygoing Australian Open, the US Open is remarkable for its unapologetically brash atmosphere, where players perform for knowledgeable fans including many celebrities. The high-energy crowds can be loud and raucous especially at night matches under lights in the two arenas with convertible roofs, Arthur Ashe and Louis Armstrong, making for some epic marathons between gladiators, male and female.

Rising stars, has-beens, underdogs, pariahs, fan favorites, divas, and journeyman tour players are subject to the changing moods of a notoriously volatile and hyper-critical crowd, which can go from cheers to boos in a New York minute. The cliché is borne out—if players sustain peak performance in front of a New York audience, they can make it anywhere!

This is the backdrop for US Open: 50 Years of Championship Tennis timed to coincide with the tournament’s 50th anniversary in the last week of August and the first week of September 2018. A bricolage of photos of winners, a timeline of key events, replays of the most exciting matches, tributes to great players, and a chronicle of the construction of the national tennis center on the site of a former garbage dump in the Queens marshlands, this coffee-table book is intended to be a multi-faceted celebration of this high-voltage occasion.

The book is organized chronologically by decade, anchored by photos of the dominant players and rivalries of each era. Here, the numerous photos of joyful champions holding trophies get a little tedious. The candid action photos are most evocative in recalling the unforgettable personalities and unique energy of each match up.

From the ’60s legends who pioneered the open era, like Ken Rosewall, Arthur Ashe, Rod Laver, Roy Emerson and Billie Jean King, through the ’70s-’90s stars who became household names thanks to TV such as Chris Evert, Martina Navratilova, Bjorn Borg, and “bad boys” Jimmy Corners and John MacEnroe who turned tennis into a viewer- and umpire-interactive sport through their vocals, to contemporary stars such as Roger Federer, Novak Djokavic, Rafael Nadal, and Venus and Serena Williams, we see how the sport has evolved over the decades.

The Williams sisters and the Bryan brothers wait to receive serve side by side in perfect doubles harmony ready to pounce on the ball. Rod Laver leaps the net in the exhilaration of winning. Billy Jean King exults in victory, eyes closed, head thrown back, grinning ear to ear. Jimmy Conners does his trademark double arm pump accompanied by a roar after making some impossible play egged on by the crowd.

Pete Sampras leaves everything he has on court leaping for a smash volley. The young Andre Agassi, headband restraining flowing locks, seems to leap off the page as he nails an unreturnable shot. Roger Federer’s grace and grit shine in a simple forehand movement. Serena Williams, the greatest women’s tennis player of all time, crushes the ball with a double-fisted forehand just as she has been overpowering opponents over a 20-year career.

The photos are interspersed with original contributions from journalists, players, coaches, and notable fans. Some of these contain behind the scenes stories providing interesting insights into the players’ lives and times, but many seem more akin to tributes between peers reciprocally patting each other on the back.

In sum, US Open: 50 Years of Championship Tennis is a mixed bag. It aims to be “a vibrant tribute to the sport, its fans, and its champions” and would make a nice gift for tennis fans who have enough room on their coffee table for this substantial hardcover tome, especially as it is very reasonably priced.