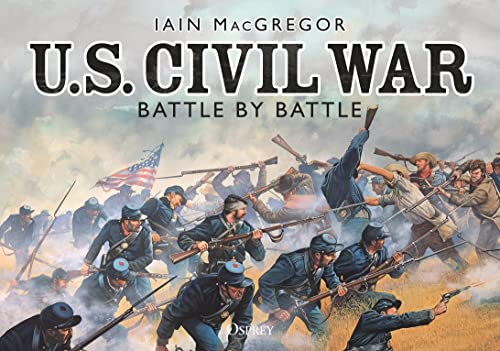 “This handy little guide helps in choosing which Civil War sites to visit.”

One of the great legacies of the veterans of the American Civil War is their insistence that Congress preserve so many of their battlefields. These “Fields of Glory” contributed to the creation of America’s modern National Park Service. Today the Civil War Trust continues that effort.

A tourist could hardly pass through the Eastern United States from Gettysburg south without passing places whose names became immortal from that conflict. This handy little guide helps in choosing which Civil War sites to visit.

In U.S. Civil War Battle by Battle, Iain MacGregor provides a guide to the major land battlefields from the beginning at the famous Fort Sumter to the end at obscure Palmito Ranch, Texas. Hundreds of places are left out in this concise little work, including such major battles as Fort Fisher and Stone’s River, but some of the lesser known engagements do receive inclusion to make a relevant chronology of the war.

Very thick tomes are in print for most of these battles, which can be purchased at the gift shop when the site has a museum. U.S. Civil War Battle by Battle, however, does not offer suggestions on interpretation centers available on the battles.

This book is about the armed conflict, not about visiting the ground where the opposing armies fought. Each of the fields of war receives only a brief but equal summary, lavishly illustrated from other Osprey titles. Gettysburg gets the same amount of space as Okolona.

The war as a whole also has a brief summary but in relevant passages within the individual histories. “In the western theater, if Union forces could win control of the Mississippi, it could split the Confederacy,” for example.

The author also offers illustrative details within the sketches. For example, in the pages devoted to Fort Sumter, “of the 1,500 men who served in” the 1st South Carolina Rifles “only 157 would remain by war’s end.”

U.S. Civil War Battle by Battle, has a chronology of the battles included. It is indexed.