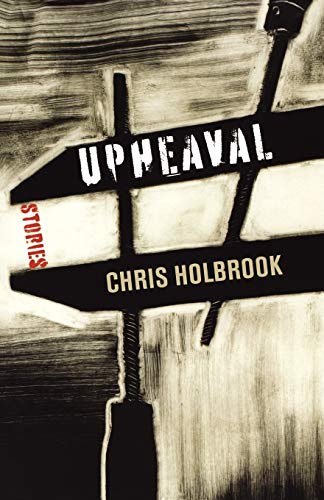 Chris Holbrook has taken a long stretch of 14 years between his acclaimed Hell and Ohio collection and this new Upheaval: Stories. Though his book appears in their “Kentucky Voices” series, Holbrook is not confined by his Appalachian roots, but rather relates that world with all working-class people and writing.

Based on lived experience, his writing shows characters as human persons in a lived space, depicting their daily lives including their actual physical work. We “drive truck,” care for children, waitress, and take odd jobs repairing homes. The writing creates space for people to speak and represent themselves in natural speech idioms and dialects, in curses, jokes, and blessings. Such writing is communal in nature; Holbrook speaks of and for his people, and so gives validation to their stories and culture and language, their suffering and grief. In every story the characters ride the dangerous road of poverty, taking risks to get by. Car accidents abound alongside the social and political forces of joblessness and natural waste.

Reading these stories is as though we’ve hung around the local diner in Hazzard, Kentucky, watching and listening to the locals, then followed each of them home with these tales of their lives. His use of native dialect and his rich body of sensual detail are done with pinpoint accuracy. In the last sequence of interrelated tales, teenage Shondra argues in her head with her mother, Trina:

Trina, on the other hand is taking a night course in creative writing, and wanders the high school hallway looking for the assigned “impressions” and aware of all:

“Other odors came to her as she went further along the hallway—chalk dust, mildew. As she passed the cafeteria, though the doors were closed it was long after hours, she was sure she could smell cooked food. The image of a green bean squashed on the tile floor came into her mind, it was no telling why.

“She caught something faint then, like something imagined. As she tried to make out what it was, she realized it was not one odor but a dozen maybe. It was aftershave maybe and deodorant, perfume. It was the way somebody’s hair smells from tobacco smoke, from pot smoke. It was sweat and bad breath and stomach gas. What it was, was the mingled-in odors of bodies all crowded together, all those high school kids like she had been before, milling the hallways.”

Holbrook’s style is so painfully close and real, its beauty grabs you like the face of a child or an old person. His characters struggle with poverty and work, family and isolation, alienation from each other and the land, yet they abound in feeling and a directness that seems raw but reveals a human depth and capacity for endurance. Elsewhere, Holbrook has claimed his realist mentors in Carmen McCarthy, Larry Brown, and fellow Appalachian James Still. These stories are contemporary, lack sentimental nostalgia, and reveal the daily upheavals of our lives.

In “Somebody Known,” Mabel Sturgill cares more for her molested neighbor Ruby than Ruby does for herself. When Mabel’s husband hires a young stranger to work on the kitchen, Mabel’s own fears arise and never quite subside. In “Christmas Down Home,” an Appalachian family transplanted to Dayton makes the long drive back home only to be trapped with others in a winter storm, closing with this telling image: “Snow whipped about the Virgin Mary’s kindly features. It piled upon the wise men’s backs and shoulders, giving their figures the semblance of old men huddled against the cold. On his side in a growing drift by the holy infant’s crib lay the figure of Joseph, the exposed face dirtied by a splatter of frozen sludge.”

In “All the Ills” a young, bitter policeman portrays the people of the town with due resentment, taking out his own anger over divorce and failure on a passing driver, beating him senseless. He explains with each punch how “You get into it good you can lose all track of yourself.”

In “New-Used” we follow a down-on-his-luck father described thusly: “He was dressed in dark pants and white shirt he wore on weekends. Even so, he looked like a many readying himself more for work than town—the cuffs of his shirt rolled above his wrists, his pants pockets bulging with keys an knife and billfold, a fresh smear of oil already marking the knuckles of his right hand.” Restless at home, he takes his son to trade in their “old rattle trap Ford” for an only slightly better used truck he struggles to have pride in.

The title story “Upheaval” is a wonder of voice and style, every word and phrase just right. The heavy sense of foreboding is captured in the sound—noise—of the workplace where rock truck driver Haskell warns us, “Got to be on your guard. . . . All the time.” This story begins a linking of characters as we follow home the young driver Dwight injured in a wreck into the next story “Something to Tell.” Here Dwight recuperates while Trina escapes caregiving for him and their allergic baby, Dreama, as well as their feisty teenager, Shondra, for a couple hours at night school.

“Done and Finished” continues with this family, only now from rebellious Shondra’s point of view as she moves in with Grandma Mag. There is no happy ending in any of these stories, most culminating in a haunting image of isolation, some rather flatly in understatement.

The final story, “The Timber Deal,” brings Dwight’s well off sister Helen and his ex-con brother to the home place where together they must decide whether to sell off the timber to get by. Dwight thinks, “What remains of the orchard are just a few scattered trees, scrubby and wild-looking, the branches showing only scant fruit and it blighted and knotty. The orchard and garden plot both are so wholly entangled in brush and briar as to have never before been tended,” and somehow we know he is speaking here of more than land and crops.

This book wins our total attention and brings our mind and heart into a new understanding of what it means to exist in a specific and well-drawn time and place.