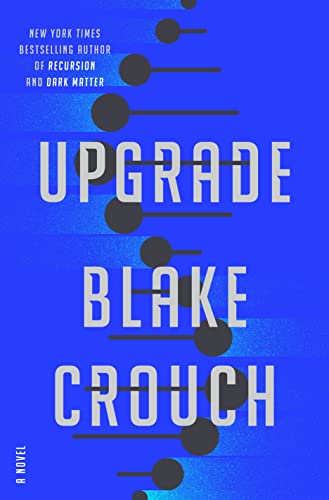 Crouch’s compelling writing style gives these storylines a fast energy and drama. At the start of Upgrade, Logan Ramsay has a fascinating and painful past: He was complicit in a mistake in the use of genetic engineering that destroyed the rice crop in China, resulting in the death of millions. Because of this past, Logan is now an agent in the Gene Protection Agency, an FBI-like unit dedicated to stopping illegal genetic engineering. That is, until a terrorist trap shoots him full of a genetic edit that turns him into a superhuman.

The beginning of the book is a gripping read, as Logan experiences the changes to his body and mind, becoming incredibly strong and intelligent, and tries to figure out who did this to him and whom he can trust. The GPA might be his enemy now, given their charter to eradicate such modification. They might even think he did it to himself on purpose.NY Journal of Books review of

Unfortunately, once the changes take their course, Logan starts to become less sympathetic. He hides what’s happening from his wife and daughter, and then when he’s on the run from the GPU, he lets them think he’s dead. He claims that this is because “the mere act of letting my family know I was alive would be putting their lives at hazard,” but this choice seems cruel. Instead of letting his family choose for themselves, he shuts them out and causes them grief.

Logan also becomes a less sympathetic character due to his extreme intelligence. He gets impatient with those around him who can’t think or communicate as quickly as he can or who understand less. He starts judging people’s motives and intentions based on tiny facial expressions. Even though his judgments are correct (or perhaps even because they are), these behaviors make him come across as arrogant and unlikable.

The only other person with the same upgrade, at least initially, is Logan’s sister, Kara. Both Logan and Kara believe that the human race does not have long to live: “Poverty, disease, starvation, and all the hatred those hardships breed, growing worse every decade—as we squeeze the last drops from our planet’s resources. We can’t keep living in denial about what’s happening or hoping that it’s someone else’s problem to solve.”

Kara believes that the way to save the world from disaster is by giving the upgrade to everyone, even though a large percentage of people would die from it. With higher intelligence, she reasons, people will do what’s needed to save themselves. Logan thinks higher intelligence won’t solve the problem, and that the cost of a billion people is too high a price to pay to find out. The main conflict of the novel, then, is Logan’s bid to stop Kara from doing what she thinks is needed.

The result is a fight between two superhumans to decide the fate of the rest of humanity. Even though Logan’s view is the preferable one, it is hard to connect with him emotionally. He leaves his family entirely to fight this battle and can wall off his own feelings in order to get the job done. He doesn’t have anything personally at stake in the fight, and so the fight becomes impersonal, and thus dull. A lot of guns and bombs go off, but the reader already knows who will win, and the thing that might give the battle a personal, emotional stake for Logan—his family—he has already chosen to abandon.