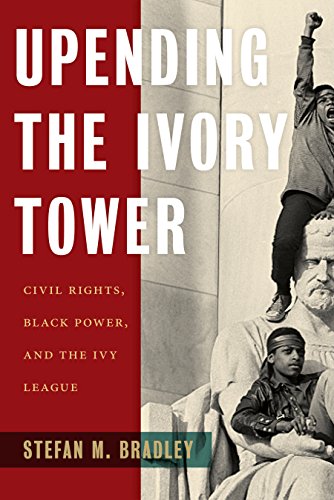 In “The Accidental Rebel,” an op-ed published in The New York Times on the 40th anniversary of the Columbia student uprising of 1968, novelist Paul Auster (Columbia ’69) asserted that student protests against Columbia’s plans to build a segregated gym on the university’s West Harlem border had less to do with halting the gym project than with venting students’ pent-up frustrations with the escalating war in Vietnam. Unlike their contemporaries in Paris and Mexico City, who protested with concrete goals and measurable impact, “We at Columbia were powerless,” Auster reflected, “and our little revolution was no more than a symbolic gesture.”

In Harlem vs. Columbia University: Black Student Power in the Late 1960s (2009), Stefan M. Bradley contends that the battle over Columbia’s “Gym Crow” was neither symbol nor surrogate. Rather, it marked the moment at which students took sides in a conflict long in the making, a product of “rising hostility between Columbia and the surrounding neighborhoods” over the university’s increasingly invasive policies as landowner and landlord.

“Why was it possible,” Bradley asks, “for white institutions to take land and power from minority populations, particularly black people, without consulting those populations?” To paraphrase James Baldwin, Columbia University expansion, like most other manifestations of “urban renewal,” inevitably meant “Negro removal.” What spurred the Ivy League university’s growing African American student population to action, alongside allied white student radicals, was their incipient realization that Harlem’s fight was their fight, and Columbia was, at least to some degree, theirs to change.

Bradley’s new book, Upending the Ivory Tower: Civil Rights, Black Power, and the Ivy League, also documents the 1968 Columbia uprising and the conflict between the university and its displaced neighbors. But Upending the Ivory Tower expands the focus of Harlem vs. Columbia University to examine integration and black student protests across the Ivy League. It explores the forces that set desegregation in motion at each school, and how African American students increasingly took it upon themselves to transform the institutions that had somewhat reluctantly admitted them and make their own educations more relevant to the African American experience through the development of Black Studies programs organized and taught by black faculty.

But Bradley’s book doesn’t trade in snapshots. Rather, he constructs an arc for each school, beginning with or before its first tentative steps toward desegregation, always taking care to depict the environments into which the first black students were thrust. These include not just the lilywhite campuses, but also the bordering black communities of Morningside Heights (Columbia) and West Philadelphia (University of Pennsylvania), and the culturally monochromatic wildernesses of Ithaca, New York (Cornell) and Hanover, New Hampshire (Dartmouth).

In most cases, Bradley chronicles how the Jackie Robinson generation of color line-crossing Ivy League students endured a profound “sense of otherness” while attempting to gain a foothold in America’s hitherto all-white meritocracy. But as one of Yale’s first black graduates, Raymond Nunn ’69 observed, achieving the traditional status of Yale alumni still seemed categorically out of reach. “He could not see himself occupying the same place in society,” Bradley writes, “because the position of powerful white men seemed to be instrumental to the powerlessness of so many in the black community.”

Universities in the Ivy League and elsewhere responded to social pressure to integrate in the 1960s for several reasons, not the least of which was to broaden the cultural experiences of the white students already on campus. In The Black Campus Movement: Black Students and the Racial Reconstitution of Higher Education, 1965–72, Ibram X. Kendi identifies another motivation as “ladder altruism . . . removing African Americans politically, economically, and culturally from the black masses.”

The efforts of activists in the black student movement of the late 1960s to subvert this goal and use their presence and power as students at major universities to engage more deeply with their communities and racial identity, took several forms. First and foremost was the struggle to establish Black Studies programs, which met with often startling skepticism, condescension, and intransigence from both faculty and administration. This occurred even at Ivy League universities, as Bradley notes, that had already established programs in Russian and Chinese Studies in response to developments in the Cold War.

At each of the Ivy League schools, these efforts succeeded in varying degrees. In typical elite institutional fashion, Bradley notes, when Yale president Kingman Brewster proclaimed the university a pioneer in Black Studies in 1969, its proposed curriculum was nearly a carbon copy of the one introduced at San Francisco State the previous year following a grueling five-month student strike and a bloody crackdown on student demonstrations by California Governor Ronald Reagan. (Even as San Francisco State’s first-in-field College of Ethnic Studies made history at its embattled inception in 1968, by 2016 it was so chronically underfunded that students embarked on a 10-day hunger strike to save it.)

Another objective, as already mentioned, was to defend the black communities surrounding urban universities, as Upending the Ivory Tower describes in chapters on Penn and Columbia. Bradley portrays the Black Power-identified struggles that flourished on urban Ivy League campuses to address these long-festering conflicts as a product of the black student activists’ understanding of their responsibilities as empowered people with a foot in both worlds. In this way, Bradley debunks the prevailing myth that these movements either came out of nowhere or were waged by outside radicals who descended on the campuses to stir up trouble.

Bradley also chronicles black students’ battle to increase minority enrollment, which in some cases meant taking leading roles in aggressively recruiting black learners at the moment when multiple elite institutions got the same idea, “to go into the ghettos and compete for the students.” At Ivy League universities in the late 1960s, minority recruitment met with great success in some cases, as at Brown, where student protests and pressure yielded commitments to increase black enrollment from just a handful of black students in 1963 to 11% of the matriculating class in 1970.

Even as Brown President Ray Heffner agreed to step up black student recruitment, he insisted that the funding allocated to meet the demand was contingent on the recruited students being “fully qualified for Brown University.” In a profoundly incisive aside, reflecting on the long-standing commitment of so many elite universities’ admissions offices to make special dispensations for legacies, scions of politically prominent families, and the like—in a country where, in historian Ira Katznelson’s phrase, affirmative action was white—Bradley remarks, “Perhaps the president believed that all white students admitted to Brown at the time must have been fully qualified for the Ivy institution.”

Upending the Ivory Tower is an engaging, revealing, fluid read. It takes its place alongside some of the finest recent scholarship on the Black Power and civil rights movements, including Kendi’s The Black Campus Movement, Martha Biondi’s The Black Revolution on Campus (whose chapter on San Francisco State and the 2016 documentary Agents of Change supply the definitive takes on that remarkable struggle), Peniel Joseph’s Waiting ‘Til the Midnight Hour: A Narrative History of Black Power in America, and Jeanne Theoharis’ boldly revisionist A More Beautiful and Terrible History: The Uses and Misuses of Civil Rights History.

Like A More Beautiful and Terrible History, Upending the Ivory Tower reminds us that none of the gains of the black student movement, like the broader civil rights movement, were inevitable. Nor were they achieved without confronting racism both overt (like the white fraternity brothers who stormed Cornell’s Willard Straight Hall, Colfax-style, to try to reclaim and redeem it from its black occupiers) and more covert, like recalcitrant faculty and administration who voiced muted approval for students’ goals while loudly decrying their methods.

Moreover, these books remind us that the struggle persists, as those who purport to celebrate dead civil rights heroes and their signature achievements, from the Voting Rights Act to Black Studies itself, work incrementally and methodically to undo them.