Up in Smoke: A Dr. Zol Szabo Medical Mystery 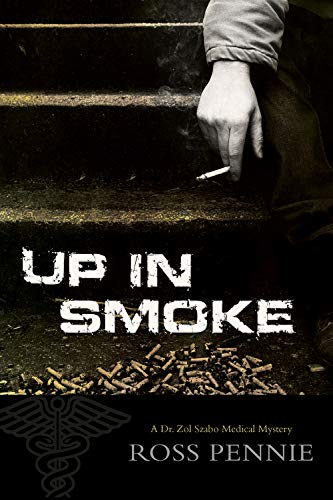 “. . . entertaining reading many levels above fluff.”

For those who don’t know what a bridge mix is, it’s a sweet and salty, crunchy and chewy mélange of candies, nuts, and raisins, generally chocolate covered, that one can snarf down by the fistful.

Number three in the series, Up in Smoke is the most delectable volume so far. The bridge mix comparison is not to suggest it’s a foodie story. Rather, it’s a medical puzzle structured like an adventurous police procedural, chock-full of ingredients.

Oh, and things blow up.

Yet the story isn’t silly: These elements work together to create an intellectual page-turner.

The lead character, Dr. Zol Szabo, a public health investigator, involuntarily revisits his tobacco-farm roots to solve an outbreak of blisters and liver failures linked to smoking. Aided by his colleagues Hamish Wakefield and Natasha Sharma, plus his romantic interest Colleen, he gets deep into Indian territory—and trouble—trying to put the pieces together and stop an epidemic.

In this volume of the series, author Pennie continues developing his characters into unique, interesting people who are credible in spite of, often because of, their eccentricities. Some of those eccentricities are pretty darn odd, too.

Szabo, for instance, who has an unusually keen sense of smell that has helped solve previous cases, now has it linked to music. A bonk on the head from a fall on ice gave him synesthesia, so that “Strong scents now conjured snippets of music inside his head so vivid they sounded like the real thing.”

Thus, “Almost every time he got a whiff of freshly brewed coffee, Céline [Dion] showed up with ten or fifteen bars of ‘My Heart Will Go On.’” A different type of music is triggered by different smells. As a connoisseur of fine foods, coffees, and spirits, Szabo has a hard time avoiding the syndrome. Eventually he comes to use it for insight.

For the reader, this characteristic is weird and amusing but also in keeping with the steady stream of surprises populating the book. Nothing is particularly big and dramatic, just so unexpected and unusual that they are intriguing and make perfect sense in Szabo’s world. The surprises and eccentricities make it almost impossible to predict plot and character.

Humor appears most intensely in a scene involving Szabo’s father and a metal detector, and at the climax, where Szabo’s solution to an impossible conflict is so clever and so simple it invites the reader to laugh out loud.

Throughout, the author salts the narrative with original and sharp descriptions that cause one to halt in reading to ponder them. Some examples:

Describing anxiety—“cockroaches were nibbling the lining of her stomach”

Such colorfulness makes for entertaining reading many levels above fluff. Combined with a growing assurance in voice and peeks into unfamiliar lifestyles and cultures, Up in Smoke delivers a solid entry in a series on an upward curve.