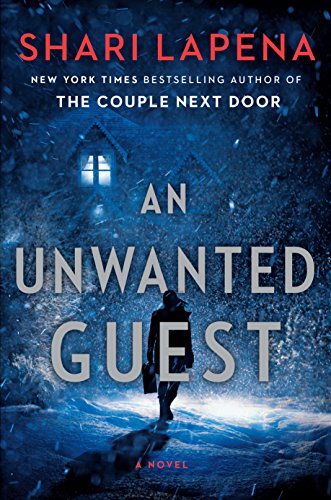 "Be sure to read this book when you don't have to be someplace or can stay up late. An Unwanted Guest will have readers hooked from page one."

Guests arriving at Mitchell's Inn in the middle of a snowstorm are bringing plenty of baggage in addition to their luggage.

Gwen harbors unfulfilled career aspirations. Riley is a shell shocked war correspondent. Candace brings bitterness and just wants to be alone. David carries the burden of past scandal. Beverly and Harry's marriage is dead, it just hasn't fallen down yet. Dana, whose beauty is both a blessing and a curse, is prone to emotional outbursts. Her fiancé, Matthew, an heir to a large fortune, carries a gun, and hates crowds and drama. Then there's Lauren and Ian. She runs the show. He just wants a drink.

Mitchell's Inn is a small, out-of-the-way, some might say quaint, private hotel in the Catskills run by James and his son Bradley. Though secluded, the hotel does have electricity, but no phones, TV, Internet, or cell service. The storm continues to rage, snow piles up, and very soon they are snowed in. After dinner and a get-acquainted chat in the lobby, everyone retires to their room.

During the night, several guests hear a scream, others hear an argument, and in the morning there's a dead body on the staircase. By then, the snow had turned first to sleet, then to ice, and now the roads are closed making it impossible to notify authorities of the death. One of the guests is a criminal lawyer who cautions that the body should not be touched or moved until the roads are cleared and police are able to get through. Guests become unnerved when they are forced to step over and around the body as they go up and down the stairs.

After the power goes out, the only illumination available is provided by the lobby fireplace, a feeble flickering gas lamp, and flashlight apps on cell phones which very soon lose their charge. Panic sets in when two more murders follow. Guests gather in the lobby for safety, some wrapped in blankets since there is no heat, either.

By then everyone is at their breaking point, and emotions boil over. Distrust, paranoia, jealousy, anger, fear, boredom, anxiety, bitterness. There's finger pointing, accusations, arguments and standoffs. And the storm does not let up.

There are a lot of characters in this book. Almost all of them show up in the opening pages, but author Shari Lapena does an excellent job of introducing them so the reader doesn't get confused.

She also pays a lot of attention to the intricate details of architecture, floor plans and layout of the hotel and grounds. For example:

There's an abundance of this kind of description, but it does not get in the way of the story. An astute reader will pay attention to this as they look for clues in their attempts to solve the mystery. The story is as twisty as a mountain road.

The big reveal at the end comes out of the blue, but it is plausible and no less compelling, so keep reading because there is one final surprise on the last page.

Author Lapena is to be applauded for this truly enjoyable locked room mystery. You don't see many of them anymore these days.