The Unwanted: America, Auschwitz, and a Village Caught In Between 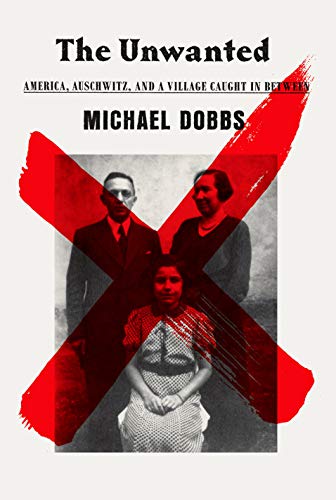 “The Unwanted reads like a combination family history and national tragedy on two continents. It includes tales of heroism and sacrifice, ambition infected by evil, and politics tainted by corruption and ineptitude, and maybe worse, indifference.”

As Nazi Germany goose-stepped its way toward the Holocaust, much of the world adopted a “see no evil” attitude until it was too late. For many today, viewing those events through the lens of history, there is a temptation to simply cluck our tongues and lament the tragedy, and vow to never let it happen again, but the sheer magnitude of numbers can be overwhelming to the point of blunting our understanding. We acknowledge the events with our heads, but our hearts lack the capacity to fully grasp what happened.

In The Unwanted: America, Auschwitz, and a Village Caught in Between, Michael Dobbs personalizes that terrible period with the names and faces of families who, no longer lost in the shuffle of dry history, cry out through the decades to be remembered.

Using photographs, letters, oral histories, and memoirs, he has pieced together a jigsaw puzzle of events that occurred in the lives of Jews from a small German town, starting with the terror of Kristallnacht (or Night of Broken Glass) to deportation to unoccupied France (where the lucky few obtained visas to other parts of Europe or the United States) and finally, tragically, “to the east”—Auschwitz.

Following a night of government sponsored, or at least sanctioned, terror against German Jews on the night of November 10, 1938, their clamor to leave their homeland erupted into a full-blown refugee crisis. Among those seeking to exit were the Jews of Kippenheim, a small village southwest of Stuttgart, near the eastern border of France. Dobbs traces the lives of families such as the Westheimers, Auerbachers, Valfers, and Wachenheimers in their desperate efforts to flee before the unthinkable—and as it turned out, the inevitable—happened.

The problem was where to go? There was no Jewish state to receive them, so many turned their eyes toward the United States. Surely the land that promised a refuge for “your tired, your poor, your huddled masses yearning to breathe free” would welcome them with open arms. But the U.S. was crippled by a quota system and an interminably slow approval process for visas, corrupted by the paying of bribes, that closed the door on many.

It was also crippled by anti-Semitism, which had led to the quota system in the first place. Dobbs reports that the architect of the law was Washington State congressman Albert Johnson, who “argued that America was in danger of being swamped by ‘unassimilable’ Jews, who were ‘filthy, un-American,’ and ‘often dangerous in their habits.’”

For the Nazis, the answer to the “Jewish problem” was easy: simply deport from Germany. Out of sight, out of mind. “Kippenheimers” unlucky enough not to obtain visas found themselves housed in miserable camps in unoccupied France, under the eyes of the Vichy government loyal to Hitler. Soon enough, though, that “answer” of deportation morphed into Hitler’s “final solution” for the Jews: extermination.

The outbreak of World War II exacerbated the problem, both in Europe and in the United States. As Dobbs tells us, “Fifth column fever swept across America in the summer of 1940, in lockstep with the Nazi blitzkrieg sweeping across western Europe.” Although Eleanor Roosevelt championed the cause of those clamoring for entry, the president found himself handcuffed by politics and the quota system.

The result was families in limbo, caught in a lethal catch-22. German Jews living outside of Germany, including those in the French camps, were stripped of their nationality by the Nazis. But in the U.S., they were still considered Germans by virtue of their birthplace and, “[a]fter Congress declared war on Germany on December 11 [1941], all ‘German natives’ who had not yet received U.S. citizenship automatically became ‘enemy aliens.’”

The author notes that “[t]he stark alternatives for many Jewish refugees trapped in southern France in 1942 were a boat to America or a train to Auschwitz.” For Kippenheimers Gerda and Momo Auerbacher and Max and Fanny Valfer, the wait for visas was deadly. With their papers stamped “Immigration to the United States pending,” they were crammed into railroad cars and taken to the final stop on their life’s journey: Auschwitz.

The parents of Hedy Wachenheimer had arranged escape to England for their daughter Hedy via the “kindertransport” [literal translation is “children’s transport”], where they hoped to join her once their visas were approved. But like others from their village, they ended up on the train to Auschwitz. In a heart-wrenching final letter to her daughter, Bella Wachenheimer wrote, “Continue to be always good and honest, carry your head high and never lose your courage.”

The Unwanted reads like a combination family history and national tragedy on two continents. It includes tales of heroism and sacrifice, ambition infected by evil, and politics tainted by corruption and ineptitude, and maybe worse, indifference. The British statesman Edmund Burke said it best: “All that is necessary for evil to triumph is for good men to do nothing.” In the end, The Unwanted is a call to action for good men and women everywhere. It is imperative that we heed the call.