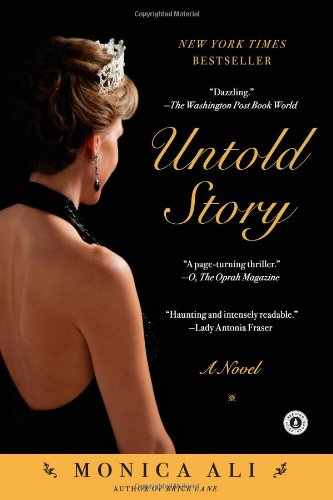 “In other hands, the fate of a beautiful and world-famous woman leaving it all behind, including her sons, could have been no better than chick lit with a twist. But Untold Story goes deeper.”

The premise of Monica Ali’s new novel and the manner in which she creates the tale demonstrates her versatility. Author Ali has given us an inside look at Bangladeshi immigrants in Brick Lane and at the life of a top chef with In the Kitchen. Now she turns her skills to the modern British monarchy in Untold Story.

What if Diana, Princess of Wales, had not died, but instead had staged her death and escaped into anonymity?

The Princess, aided by her private secretary, takes on a new identity in Kensington, a small American Midwestern town, posing as a woman in hiding from an abusive ex-husband. Lydia, as she calls herself, comes across as sweet but a bit dull, beautiful but low on self-esteem.

Lydia has managed to surround herself with female friends who don’t pry. Her boyfriend, Carson, wants to know more than she can reveal, so though he helps to keep her company he also causes her continuous mental and emotional turmoil. When John Grabowski, British photojournalist on sabbatical to write a book, washes up at the Kensington bed-and-breakfast, the tension mounts.

Despite her plastic surgery and darkened hair, the former princess is recognized by the paparazzo who had photographed Diana intensely during the crazy years before her “death;” her eyes give her away. It would be the scoop of his life but he (and the reader) find out what this woman is really made of.

The final chapters read like a thriller, with the exception that thrillers often have predictable, formulaic endings. The denouement of Untold Story is satisfyingly unpredictable and perplexing.

When released in the United Kingdom on March 31, 2011, the novel was the most reviewed book throughout the following week, stirring up intense controversy among British critics. Did Monica Ali desert her multicultural vision and stoop to trashy commercialism just in time for the Royal Wedding? Or did she rescue Princess Diana from her tabloid identity and conjure up a reverse fairy tale that explores the cost of our celebrity culture and the price paid by non-conforming women?

I opt for the latter opinion. Lydia, her female friends, the boyfriend, and Grabowski are certainly familiar types found in our everyday world. In other hands, the fate of a beautiful and world-famous woman leaving it all behind, including her sons, could have been no better than chick lit with a twist. But Untold Story goes deeper. Even the most avid Diana fanatic would have to ask herself if she would really want to be a princess in the 21st century.