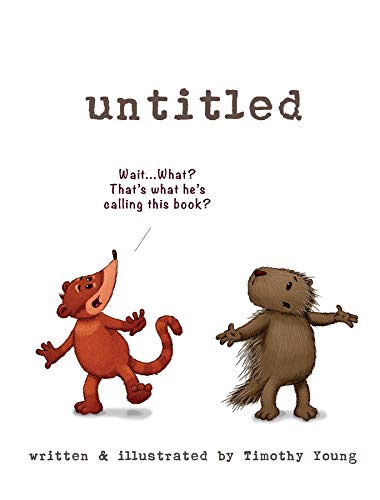 “Fun and engaging, Untitled proves just how interactive a deceptively simple picture book can be.”

Untitled is a picture book about writing and illustrating picture books, masked in a story of two animal characters. The third wall is broken as the animals, a coatimundi and a capybara, talk about the writer and illustrator, the story he'll put them in, whether it will be fun and exciting or stupid and boring. Young readers will enjoy suggesting their own ideas for what could happen. Will the book become a western? An alien adventure in outer space? A battle against dragons? The point is clear: anything can happen in a story, and writers can do whatever they want with their characters.

Capybara starts out as a porcupine but loses his quills early on. “Weren't you a porcupine on the last page?” the coatimundi asks. “Yeah, now I'm a capybara. I guess he changed his mind again. Maybe he got tired of drawing all the quills.” And in fact the two creatures look the same except for the quills, turning the capybara into a naked porcupine. Kids will appreciate this visual joke.

The story gives broad winks to classic comedy (the capybara-porcupine is named “Ignatz,” evoking Krazy Kat) and to children's books, with a reenactment of a scene from Go, Dog, Go! and a double-page spread of all the much better writers and illustrators who could have drawn these animal characters. Readers will recognize Dr. Seuss, Dav Pilkey, Jean De Brunhoff, and Maurice Sendak, among others.

These kinds of insider references delight librarians, teachers, parents, and kids alike. This is a book sure to spark a lot of discussion about what makes a good story and a captivating ending. Any young reader who picks up this book will want to draw their own ending. Young closes with a silly twist that offers our two heroes hope for a sequel and inspiration for readers to write their own story. Fun and engaging, Untitled proves just how interactive a deceptively simple picture book can be.