Unthinkable: An Extraordinary Journey Through the World's Strangest Brains 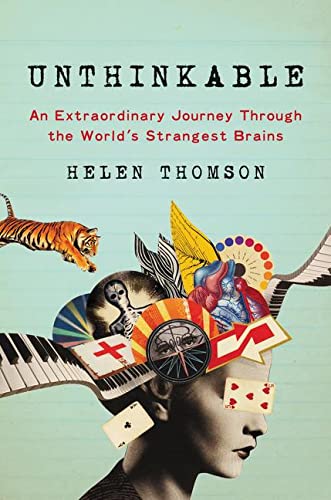 Why do some people see a dress as white and gold, while others insist the same dress is blue and black? You remember The Dress, right? Why are schizophrenics more able to tickle themselves? Why does the loss of vision sometimes lead to hallucinations? And, as every intro psych student comes to ponder, is your red the same as my red? In other words, does my world look and feel like yours? These are some of the questions Helen Thomson poses in Unthinkable, her wide-ranging and fascinating exploration into the workings of the brain.

Thomson highlights nine people with the “world’s strangest brains” to better understand how a “normal” brain creates reality. It turns out that in most cases normal and strange fall along a continuum.

For instance, Sharon, can become disoriented in her own house. She has “trouble producing an accurate mental map of her surroundings,” as opposed to those who barely need to glance at a GPS screen. It’s likely that we all fall along a “navigational spectrum,” which should provide some comfort to those who become easily turned around.

Sharon herself could have used this comfort, as she kept her condition secret for many years, fearing the shame and stigma that might attach itself to her loss. Her doctors were baffled; one even suggested she had multiple personalities; but she remained remarkably upbeat and even found a creative way to deal with her disorientation, a solution that will delight readers.

In other cases, Bob has superior autobiographical memory. He can describe any day with remarkable detail. Rubén has synesthesia and links colors with emotions, sensing an aura around people, which is not as mysterious as it sounds. Graham once believed he was dead, which is in fact mysterious, and which leads to an intriguing discussion on consciousness.

Whether she’s writing about auras or hallucinations or being dead, Thomson always returns—with precision and clarity—to the science behind these claims. She’s an able tour guide, taking us from Dr. Thomas Willis, who in the 17th century “created meticulous illustrations of the human brain,” to today’s functional MRIs, highlighting along the way the strange brains of dozens of others, such as Phineas Gage, who suffered in effect a lobotomy when a railroad tamping rod severed his frontal lobe during an explosion, and Elizabeth Loftus, who demonstrated how false memories can be created by an experimenter.

Thomson also has an uncanny ability to anticipate our next question. We wonder, for instance, if Bob is tortured by his “perfect” memory. When he recalls a painful episode, does he relive the pain as well? Not really, though Thomson does contrast him with Jill, whose superior memory tortures her.

The one notable exception here. In trying to understand why she can’t form mental maps, Sharon once contacted the great Oliver Sacks about her inability to orient herself. Sacks wrote back—a marvel of a gift—and wondered if Sharon had prosopagnosia, the inability to recognize familiar faces. Sacks himself suffered from prosopagnosia, which may have shaped his own perception here. It’s a bit surprising that Thomson doesn’t at least mention this connection. And one wonders how Sacks, always self-effacing and curious, might have reacted to this claim.

Thomson does pay homage to Sacks, whose name inevitably comes to mind at the mere mention of strange brains. What would Sacks have thought of this book? That may be the ultimate question here. Perhaps it’s too bold to assume, but Sacks would have applauded this effort, along with Thomson’s affability, her curiosity and compassion, her knack for helping us recognize that we’re more similar than we are different—that is, unless you’re at odds with someone over Laurel and Yanny. If that doesn’t sound familiar, look it up.