The Unspeakable: And Other Subjects of Discussion 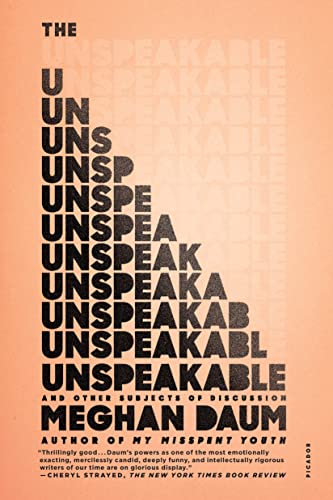 This new book of essays by Meghan Daum, a columnist for the Los Angeles Times, is an effort, she writes, to tackle “the unspeakable” subjects of contemporary life—motherhood or lack thereof, love toward one’s parents, eating, dating, pets, and just plain living. These subjects of course are the bread and butter of every women’s magazine on the planet but—and here is where Daum is correct—no one tackles them head on the way she does.

“I wanted to look at why we so often feel guilty or even ashamed when we don’t feel the way we’re ‘supposed to feel’ about the big (and sometimes even small) events of our lives,” she writes.

It’s apparent from the first essay that Meghan Daum does not feel ashamed. It’s about her mother and is titled “Matricide.” Daum describes good old mom as a “fraud . . . she always felt to me like an outline of a person, a pen-and-ink drawing with nothing colored in.”

As her mother is on her deathbed, Daum holds her hand, not because she feels any love toward her, but because she believes a nurse may be watching.

There is no doubt that Daum is a master essayist and to say that she can turn a phrase is akin to saying that Frank Sinatra knew a thing or two about singing.

Here’s how she describes a singles audience at a temple who came to hear her speak at a panel about dating: “There were patchy mustaches and ill-fitting electric-blue sweaters that could only have been purchased a T.J. Maxx by septuagenarian mothers holding out hope that their future daughter-in-law was just a J-Date away.”

Time and again in this book, Daum gives her subjects the scorched earth treatment to prove her main point that she’s willing to go “there”—the unspeakable areas other writers don’t dare to tread.

And if she’s willing to refer to her mother as a “fraud” you can imagine how she treats some of the men she’s lived with and dated which, by the way, she says she did for the experience, not because she was deeply in love.

Or as she puts it, “at age thirty, [I] happily embarked on the ‘adventure’ of living in a lopsided, shacklike farmhouse in the rural Midwest with a guy who was about as marriageable as an electric fence.”

Personal journalism of this sort requires that the reader embrace the writer. You don’t have to like her, but you have to find her interesting, and there’s no doubt Daum is most of the time. Still, one does get the uncomfortable feeling here and there of being stuck in an elevator with Andy Rooney’s niece. It depends on the level of crabbiness you can tolerate.

That said, Daum’s essay about having dinner with Joni Mitchell is worth the price of admission. She does humble brag a bit such as when she quotes Joni telling her, “You have honored me tonight . . . you have truly honored me.”

But then Daum does a very Daum thing—she loses Joni Mitchell’s home phone number and writes: “I let the woman herself slip away like a dream burned into abstraction by the glare of wakefulness.”