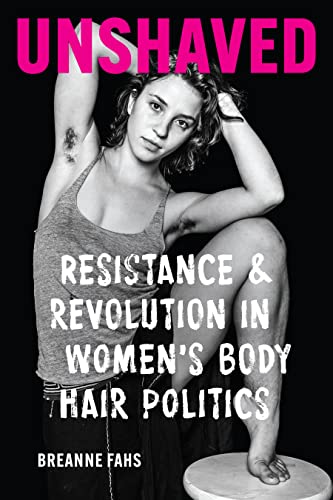 Unshaved: Resistance and Revolution in Women’s Body Hair Politics deals with compliance with cultural norms of body hair removal—largely on the basis of data from American women— and the experiences of women who have resisted those norms.

Although there are some hints in the introduction that Fahs is aware of the essential arbitrariness of the policing of hair, as other elements of both male and female appearance, across times, races, classes and cultures, a guiding principle of this study appears to be “Given what is known about the influence of American television on body shaming and eating disorders in women throughout the world, one can only surmise that norms of hairlessness are also being exported with equal intensity.”

Fahr writes that “The story of women’s body hair removal connects at its core to the story of women’s oppression itself, to the insidious ways that women’s bodies are controlled, managed, shaped, restricted, constrained and dictated by forces they did not choose or decide.” She further examines the ways in which non-conforming bodies can serve as “tools of resistance to the broader forces of oppression . . . patriarchy, misogyny, racism, white supremacy, classism, homophobia, fat phobia, ableism, ageism and transphobia.”

Fahr aims to “think big while looking at something small.” She has two main sources of data: first, “Since 2007 I have given students in some of my courses an optional extra credit assignment where they grow their body hair(women) remove their body hair (men) or creatively rebel with body hair (trans/nonbinary folks)”. The logs students kept of reactions to their innovation provide the basis for early chapters.

And second, in the final chapters she examines “through twenty-two interviews with body hair rebels the question of how body hair connects to gender, power and politics . . .”

Fahr sees as pioneering her aim to interrogate “the nexus between individual choices about body hair and the cultural political implications about breaking body hair norms,” though this claim of being pioneering is perhaps open to challenge. Even the many individuals who lack the expert jargon are familiar with the tropes of the hairy-legged feminist and/or lesbian whether or not they subscribe to the stereotyping.

There is very little thinking in here that anyone could dispute, and equally very little that is new. Despite avowed attempts to be interdisciplinary and “joyful” both the author and her research subjects are given to expressing themselves with such banality that the there are many points where the alert reader may wish for it all to be over.

Fahr states for example that, “Participants also noted that women of color typically had more visible body hair than white women did, and that darker hair could become more stigmatized.” And later Gloria (56/white/heterosexual) one of the 22 rebels, wanted younger women to know that they could change their minds about body hair, and that their own happiness mattered most. “Do what you want when you want and you don’t have to commit to stick fully with that. Things can change over time.”

Gloria has however hit upon an obvious but important point about hair: that is not made elsewhere, which is that it is one of the most malleable of our physical attributes and hence an easy target for manipulation and fashion. A cultural constant which is that long head- hair for both men and women seems to be associated with fertility, sexuality and generally having a good time is not much addressed; why do we have everywhere tonsured monks on the one hand, and Queen guitarist, Brian May, on the other . . . just to inject a little joy into this discussion!

Fahr tells us several times that she has been attacked for many years for her “triviality” in continuing to study women’s body hair removal. Perhaps some critics mean to tell her that there is now not much new to say. It would perhaps have been more interesting to play down the pages of verbatim comments from Gloria/Indigo/Ula/Vera, etc., and to pay more attention to the changing forces and narratives (political, commercial, military, penal) that shape our efforts to control our appearances. There is a strong hint of this in the Introduction which is not followed through.

There is a great deal of repetition in the book that may suggest that the individual chapters have been produced for other purposes and only imperfectly homogenized into a book. Adding chapter subtitles does not automatically introduce structure. The most successful chapters are those about zines on body hair “Hairy, Not So Scary,” and photography “Expanding the Body Hair Imaginary” where we are taken beyond the survey data.

While the point is well-taken (and frequently made) that we experience our bodies as a cultural product, however much we may think we are acting from personal choice, the focus on women’s body hair looks a little old-fashioned. Kim Kardashian may have had overall body-lasering but it seems she has also altered her lips, forehead, chin, eyes, cheekbones, buttocks, breasts, abdomen, etc., and not in ways which show any interest in conformity with a thin, thin-lipped, white, blonde ideal? Could this be progress then? And Linda Evangelista’s fat-freezing presents us with another extreme case of self-improvement according to some cultural imperative: crolipolysis anyone?