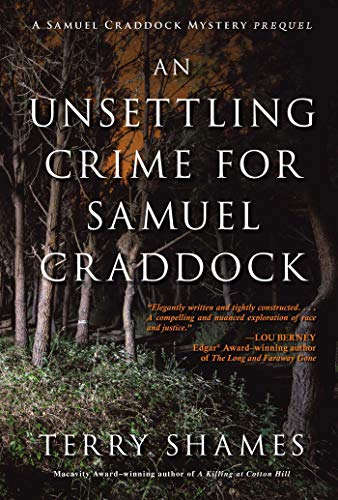 Retired police chief Samuel Craddock of Jarrett Creek, Texas, the protagonist of five novels in this quietly popular mystery series by Terry Shames, is back in a sixth offering which provides fans with a prequel—Craddock’s origin story.

Readers encounter a young, callow Craddock newly discharged from the Air Force and appointed chief of police by a somewhat dubious town administration. His soporific small-town routine of missing hubcaps and runaway dogs is interrupted when five young black people are found murdered in a burned-out house on the outskirts of town.

When the Highway Patrol, who have jurisdiction, arrest a young black man Craddock knows cannot be responsible for such a heinous act of violence, Craddock must decide whether to commit himself to solving his first big mystery, proving his decision to accept the job of chief was not a mistake, or turn away and allow events to unfold as they may.

An Unsettling Crime for Samuel Craddock is categorized as a police procedural, but it contains cozy elements that appear throughout the rest of the series as well. For example, Shames notes in her Acknowledgments that a reader won the chance to have a character in this novel named after him and had the option “to be a good guy or a bad guy.” Unfortunately, her characters tend to come off as rather flat and shallow in this way.

John Sutherland wanted to be a bad guy, and for a fact his character is thoroughly unlikable. Deputy Doug Tilley strikes us as a frustrating impediment, and we’re not proven wrong. But Samuel Craddock is a strong enough protagonist to grab and hold our attention, and the echoes of Craig Johnson’s Walt Longmire are detectible even here in this portrait of the chief emeritus as a young man.

In this prequel readers encounter Jeanne, Craddock’s late wife. We see her collecting the expensive works of art featured in the other novels, we experience her disapproval of Craddock’s career decision, and we witness the delivery of Craddock’s first herd of cattle as a step toward his dream of being “a gentleman farmer.”

The time period is somewhat foggy, however. While the presence of civil rights activists, the free use of the “n word,” and the arrival of the drug problem to rural Texas give the story a sixties-to-seventies feel, the reader is told it takes place almost 20 years after the “whole country went through a big upheaval after President Kennedy was shot and the Vietnam War heated up,” which would situate it in the early eighties. This fuzziness contributes further to the cozy feel of the story, with current events more a peripheral storm front moving in on Jarrett Creek than a focused context for the plot.

Shames chooses to narrate her series in first-person present tense, still a trendy choice within some creative writing circles, but it causes her prose to be awkward and distracting at times as she alternates between present action and past background information, often within the same short paragraph:

“It’s probably wrong to assume that because Truly Bennett is black he knows all the other black people in town, but I can’t help dreading telling him about the scene out at the burned house. Of course he might already know. His daddy was still standing on the porch when I drove back by, keeping vigil. There was a young girl with him. I assume that was Truly’s sister.”

By the time Craddock’s narrative voice finishes strobing back and forth between tenses, the reader is often not completely sure of the context in which certain actions took place.

Nevertheless, Shames demonstrates once again an uncanny knack for keeping the pages turning as her story unfolds. Although each interview Craddock conducts seems to end with him knowing no more than he did beforehand, and the plot itself in retrospect doesn’t cover very much territory from beginning to end, An Unsettling Crime for Samuel Craddock manages to keep the reader engaged at every step and leaves us more than willing to reach for the next installment in this charming series.