Unsavory Truth: How Food Companies Skew the Science of What We Eat 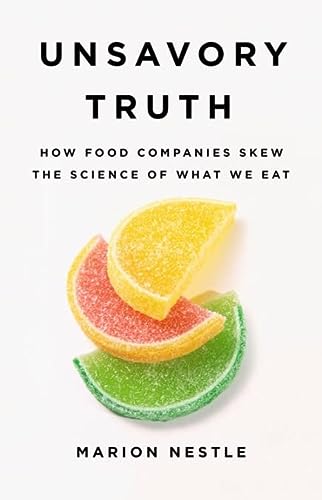 From breakfast cereal to soda there is a food warrior named Marion Nestle who has become a savior to many Americans who strive to know the truth about the American food industry. She has had an accomplished career, which includes the Paulette Goddard Professorship in the Department of Nutrition, Food Studies, and Public Health at New York University.

Her research has focused on the “scientific, economic, and social influences on food choice and obesity, with an emphasis on the role of food marketing.” She has written prize-winning books about food politics, the soda industry, food safety, and what we should be eating. Her numerous publications spotlight the American food industry and its impact on the American public. Nestle concludes that the spread of unhealthy food is the result of a “dysfunctional food system.”

In her latest book, Unsavory Truth, Marion Nestle exposes the links and relationships between nutrition researchers and the funding they receive from the food industry. These strong and abiding affiliations result in numerous public health issues such as obesity, “food insecurity,” and environmental damage.

Nestle questions this symbiotic alliance and the possibility of unethical results. How can boundaries not be crossed when these scientific studies are funded by the food industry? The goal in writing this book was to answer a basic question: “Should the food, drink and supplement industries fund public health research?”

Marion Nestle describes the dysfunctional relationship between the American “food system,” the major manufacturers of food in the United States, and the scientists who are funded for their studies by the food industry. She paints for us a system that closely links governmental agencies, universities, and nutritional scientific studies.

These scientific studies performed by qualified scientists are funded by a variety of major food companies, and the results of these studies then emerge into marketing strategies. The result is a public which is uninformed and misled.

As recently as October 24, 2018, a USA Today columnist reported that coconut oil, which has been advertised as a “health food of sorts,” has little evidence to back that claim. In fact, coconut oil has more saturated fat than lard. It is a challenge to the consumer to make correct food choices for themselves and their families.

Marion Nestle is concerned with these partnerships for a variety of reasons. The studies can result in “biased opinions, distorted research agendas, skewed study results, compromised dietary advice, loss of professional opportunities and, not least, reduced public trust.” However, she points out that some major food companies have begun to comply with studies that follow ethical guidelines and rules of integrity.

The author asks the reader to ponder some obvious claims such as dark chocolate and almonds being promoted as health foods and blueberries as an antidote to cancer. Perhaps the American public has been brainwashed into believing these untruths?

We live in a time when food is bountiful and overeating is rampant. Supermarkets are teeming with food choices. The consumer is vulnerable to misinformation about those choices. Processed foods, junk food, and sugared cereals are commercialized and are bountiful. The proven connection between the advertising of non-nutritious food and childhood obesity is substantial. Obesity in America has become one of the greatest health risks for both adults and children.  In addition to health risks, it contributes to social and economic risks as well.  Obesity in children usually develops into adult illnesses such as diabetes, cardiovascular illness, and some forms of cancer.

The author returns many times to the soda industry. Coca-Cola, for example, had enormous concerns when in 2015 the new Dietary Guidelines for Americans recommended “eliminating sugar-sweetened beverages from schools, taxing them, and restricting advertising of foods and beverages with high sodium or added sugars for all populations.” Coca-Cola immediately began a campaign to work with Congress and federal agencies to have these guidelines removed.

The author notes that “not all industry backed-research is biased.” We must be cautious, however. In addition, she offers solutions to these problems and reinforces the fact that the public has eventual control over what they buy, noting that the consumer has the most important vote.

Vigilance by the consumer is necessary to avoid being duped by the major food companies when deciding what they should be eating. The American public has the ultimate responsibility to challenge unacceptable marketing claims.

Like most health advocates, Marion Nestle suggests guidelines. She encourages her readers to “eat your veggies, choose relatively unprocessed foods, keep junk foods to a minimum, and watch excessive calories.” We are what we eat.