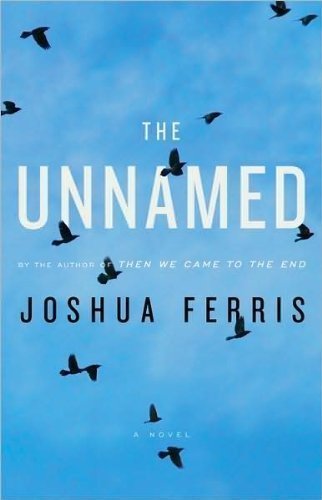 “The heart asks pleasure first, and then excuse from pain.”
—Emily Dickinson

“God, if He was anything, was the answer to the mystery of why you got sick. . . .”
—Joshua Ferris

Joshua Ferris’ sophomore novel, The Unnamed, is a dark and mystical tale that brings the pain before it delivers the pleasure. This is about Tim Farnsworth, who is blessed with status and a fine career. Good luck and good fate lead him to take two things for granted: his health and his family.

Tim’s a successful lawyer in a private New York City firm until he’s hit with a mysterious condition that causes him to walk. When the condition strikes, he’s forced to abandon whatever he’s doing and walk for miles and hours until he drops and falls asleep from exhaustion. The condition—which the medical establishment does not want to label a disease (Tim being the only person on record affected by it)—goes into remission twice enabling Tim to resume his work. But Tim’s already lost 17 months to this condition when, as the story opens, “it’s back.”

Initially Tim places his faith in medicine, doctors and mental health practitioners until he comes to see that “there was never anything anyone could do” for him. He’s first affected physically, then mentally and becomes “removed from the person who knew how to form ideas.” He becomes a man without hope, which to him seems worse than death. Tim comes to envy cancer patients who have the “power of a familiar and fatal disease.”

It’s not difficult to see that this is pretty dark and dangerous territory for a novel, but Ferris is skilled and talented enough to turn the ship around. A tale of illness and disease is transformed into one about marriage and family and the strength—physical and emotional—that these can provide. Tim loses everything—career, family, wife, daughter—before he becomes stronger (in a strange sense) than the world around him.

His suffering has a pay-off and he sees and experiences hope before the end of his days.

This is a story about redemption. Tim literally walks away from everything, including spouse Jane, until he has to decide whether to return to her—no matter what the cost. Eventually Jane and others come to be amazed that “he could suffer like that.” In the end Tim, like every one of us, comes to experience joy in life’s small things: seeing children play, observing birds, having a couple of beers with an old friend, feeling the love of a daughter.

Ferris’ work is close to breathtaking here, although the second half of the work feels much longer than the first. Maybe that’s because the reader is meant to experience Tim’s disease states—pain, fever, disorientation, hallucinations—before he returns to normalcy. We wonder if he’s gone insane in his battle with “The Other”—a condition, a disease, a devil, a fear, his mortality—until he accepts that it’s his inalienable right to have a life, a normal life.

“She didn’t need a prescription, she needed a life.”

Taut, engaging, emotional. Tinged with genius and yet troubling, The Unnamed is a stunner and one of the few novels the average reader will come across in which each and every chapter closes brilliantly.